From the Other Side of the Fence

My ongoing commitment to CGD sees me watching and listening to many presentations on genealogy related topics. Earlier tonight I stood on the other side of the fence.

Although I have presented to a number of audiences over the years I have never given a talk in my local area. I was thrilled when, last year, I was approached by Neil Chippendale the Local History Librarian at Hornsby Library to give a presentation in their series of Family History talks. 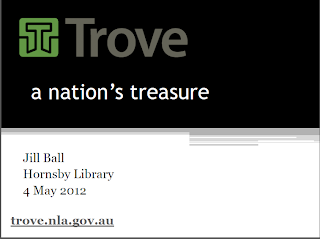 I was more nervous than usual prior to this talk as I felt I had to do really well for my local community. When Neil told me a few days ago that the event was sold out that made me even more nervous. My topic, Trove: a nation's treasure, was not one that I felt particularly confident in presenting but having given the talk I realise that I do know quite a bit about this fantastic resource. The good news is that techonology didn't fail, no-one nodded off to sleep and many people including a couple of librarians said that they had learned quite a few new tricks.

I got such a buzz from presenting to my neighbours who were such an appreciative audience. I thank Neil, a perfect host, who was there to greet me and help me set up; he made sure I had everything I needed and gave me a glowing introduction and vote of thanks.

Thanks also to Mark from Trove who took a look at my handouts and slides and suggested a couple of amendments.
Posted by GeniAus at 11:47 PM

Congrats on a talk well done. Here's to many more!