Six years ago I blogged about some very important four-legged family members here. Since Marty's grisly end and because we travel a lot I have been disinclined to get another pooch although I love having a dog around the house.

My poochlessness came to an end on Boxing Day when the family presented me with a fluffy little bundle of joy. While we were overseas the kids and Mr GeniAus colluded to find the perfect pup for me and they have delivered (with a promise of pet-sitting when we are adventuring).

Paddy, who has been living with family members for four weeks, has stolen their hearts and in the bargain has been exposed to lots of children. He is in for a quiet existence as he keeps this LOL (little old lady) company as she hunts for ancestors.

Already Paddy has proved to be a perfect Geneapet. When he first followed me into my study he found a niche on a bottom shelf between two piles of filing. Each time Paddy has entered he has settled in that same spot.

And how did we choose the name Paddy?

I said to family that he should have an ancestor's name so as we sat around mulling over names my 13 year old grandson opened my family website on his smartphone and started putting forward suggestions which various other family members commented on and rejected. I was keen on Frank but that was howled down. We finally agreed on Patrick Curry,  my convict ancestor, who was known as Paddy.

Regular readers may have noticed that the frequency of my blog posts decreased over the past few weeks. Mr GeniAus and I took a break and travelled by sea from Dubai to Cape Town.

I had great intentions of blogging and researching my family history during days at sea but  found myself organising photos from the amazing ports we visited and taking part in tempting onboard activities. I am pleased that I managed to schedule a few posts before I left home so that my blog wasn't totally dormant.

We arrived home  just in time for dinner on Christmas Day. Now that we are mostly done with family festivities I am devoting my spare time in January to Rootstech preparation and my to do list. If you are expecting some sort of response from me and don't get one please send me a gentle reminder.

I have many blog posts waiting to  be read in my RSS feed and will attend to them shortly. Hopefully I will have a selection for a GeniAus Gems post on Friday or Saturday.

It's great to be back. I feel revitalised and ready to reenter the geneasphere with a vengeance.

Trove Tuesday - Not what I expected!

I thought I'd visit Trove to see what I could find out something about the street on which I live. I expected articles about potholes, maintenance and perhaps some history. If you read to the bottom of this post you'll see how I was surprised.

I discovered that our road was opened in 1895  and there were great celebrations in the local area.

Saturday last was a gala day at Galston, the well-known prolific fruit-growing centre, situated about six miles from Hornsby, the occasion being the opening, of a new road between the two places by the Minister for Works. Mr. Young left the Redfem Railway Station at 9 a.m., and was joined at Hornsby by Messrs. Garrard (Minister for Education and Industry), and Mr. E. M. Clarke, M.L.A. The members of the local progress committee, con- sisting of Messrs. A. Higgins, W. Higgins, T. Salmon, Geo. Higgins, J. Fitzgerald, and M. Haydon, seized the opportunity to interview the Minister with respect to local requirements, notably the imperative necessity for an overway bridge across the main and North Shore railway lines, some-what nearer the railway station than the one at present in existence, and the removal of a large quantity of decaying rubbish that had been shot close to the engine shed. The Minister for Railways having promised to bring both matters under the notice of the commis- sioners, the party adjourned to the local hotel for refreshments prior to leaving over the new road to Galston.

The road winds along through pretty scenery rising to a height of 400 feet, which is the highest point, and from whence a splendid view of the hill and dale, with the Blue Mountains as an imposing background, is to be obtained. On arrival at Berowra Creek, near the end of the new road, luncheon was par- taken of Mr. H. Hudson occupied the chair, and among other residents of the district were Messrs. B. Crossland, C.Lovely, J. W. Wilkins, and J. Ungler.

After the usual loyal toasts were disposed of the chairman proposed the health of the Ministry and Parliament, and ex- pressed his conviction that the present Government were doing their best to ad-vance the interests of the colony, and that the Parliament was as honest a one as they could have. The Minister for Works, in re- plying to the toast, said the Government had perfect faith in the future of the colony, and regretted the pes-simistic views of public affairs that were taken by a large number of people. If they had confidence in themselves and in their resources, they would soon belanded on the high road to prosperity. The Government as freetraders recognisedthe duty of helping the producers to get their goods to market, to promote easytransit, to lessen the cost of living and bring the markets of the world within as easy reach as possible of the producers. The opening of that road was a step in that direction, and it would prove an advantage and a convenience to a dis trict which, he understood, contained some of the finest soil in the country. TheMinister for Education having also briefly returned thanks, Mr. G. M. Clark replied on behalf of the Parliament. Prosperity to the district was proposed by Mr. D. Davis and responded to by Messrs. Ungher, Hutchinson, and A. Higgins, and the healths of Mr. W. Smith, divisional engineer, and Mr. Hope (the officers whosuperintended the construction of the road), the press, and the chairman were also honored.

The party, after inspecting several orchards in the vicinity, returned to town by way of Parramatta. The cost of the road was £4800, and in its construc-tion 40,000 cubic yards of rock were excavated, the work being partly by the " butty gang" system, and partly by con- tract at a cost of 4½d to 7d per cubic yard. The work has been very substantially executed, and includes numerous retaining walls, small bridges, and culverts. The distance saved to the fruitgrowers in getting their produce to the railway is about fourteen miles, and that shouldmake a considerable difference in their profits."
1895 'Hornsby-Galston Road.', Evening News (Sydney, NSW : 1869 - 1931), 4 March, p. 7, viewed 23 October, 2015, http://nla.gov.au/nla.news-article108074916

The first post that appeared in my results list was not at all what I expected. It was a poem about Galston Road. Today vehicles on the road can be noisy but if one wanders away from the road one can experience the natural delights described in these verses. I enjoy this environment each day and as I sit at my desk I can hear the magpies and  see those "tall dreaming gums against the sky"

A further search of Trove for Gladys Pattison returned a healthy list of links to poems published in various newspapers between 1918 and 1928.

I found on Trove a page of cartoons from 1952. Here is one of them.

I love the portrait that I use as my profile picture on blogs and other social media. It was drawn by my eldest grandchild about eight years ago.

When I was going through some family photos recently I found a picture I took in her younger brother's classroom in 2012.  His teacher had obvioulsy set the same assignment for her students. What I had photographed was a new and different portrait drawn by my grandson. 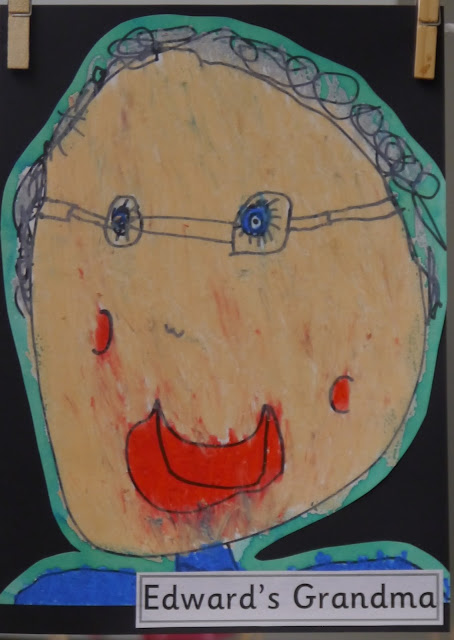 This post reminds that there is much world news published on Trove. Unravelling the genealogy of this group could be challenging.

Posted by GeniAus at 9:00 AM No comments: