From the Archives - Cardboard Cutouts or Real People?

Sharing a post from ten years ago that sadly is still relevant to some genealogy presenters today.

While I have enjoyed communicating and collaborating via Zoom and other online tools during Covid times I have missed interacting with real people in a face-to -face situation.

I finally had a chance to present two face-to -face workshops about the Trove newspaper collection to the members of The Tea Gardens and Hawks Nest Family History Research Group yesterday. The members of this Group are to be congratulated for their fundraising efforts in the local community which resulted in their local newspaper, NOTA, being digitised and added to Trove.  They thought it timely to host some Trove workshops and I was the lucky person who scored this gig.

I had a super day with the participants whose Trove experience ranged from experienced user to a gentleman who said "I only heard about it this week". It is so much easier to engage with people when one is together with them in person. We had two lively sessions (separated by a yummy lunch) with lots of laughter, learning and sharing of tips. I tried a different approach with my talk and, after just a few introductory slides, demonstrated application of my Trove Tips live on the Trove site. This provided a more effective learning experience as I was able to integrate participants' interests into the workshop.

While I enjoyed my time with the members it was a surprise that I received that put the icing on the cake of my day.

I was seated beside a delightful gentleman who was recounting the story of his Christening; his name didn't ring a bell with me but when he mentioned  his wife's name, Shirley, I looked at him and said "she's my cousin". He responded with a bemused look until I said we share Elizabeth Phipps as an ancestor. We were both flabbergasted that serendipity had thrown us together in Tea Gardens. I had Shirley in my tree but I was unaware of her current whereabouts. I exchanged details with the gentleman and look forward to sharing ancestor stories soon.

Sadly I forgot to grab a photo with the gentleman before he left but one of the Group members sent me a copy of one that I have cropped, it's a bit fuzzy but captures the moment of our surprise. 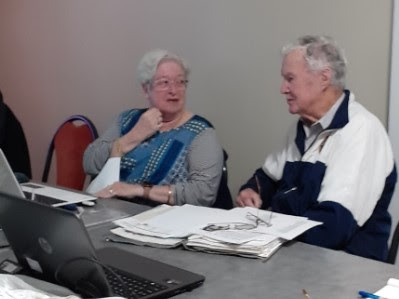 Posted by GeniAus at 4:53 PM No comments:

From the archives: The Earliest Social Network Ever Discovered

I first published this post on 23rd May 2011. Even more pertinent today now there are more free image sharing options available.

From the Archives - Where do you put them? Conference Papers

From time to time I go through my blog archive and select an old post to repost in my From the Archives series.

I still follow this practice that I outlined in a post ten years ago although the files have moved every few years as I upgrade my external hard drive. It is pleasing to note that ten years down the track many of the notes I file arrive in digital format.

When genealogists find some new amazing fact relating to a family member they often break into a "Genealogy Happy Dance".

This morning I had cause to perform, as my version of a Happy Dance, an Irish Jig.

While cataloguing the books for my local Family History Group and uploading them to the Group's Librarything account I came across this title : With hearts and hands and voices : the centenary history of the Sacred Heart Parish, Hamilton 1884-1984

I knew that my Irish 3x Great-Uncle Michael Harrington Ryan had been involved with that parish in Australia but not in the years mentioned in the book's title. I still had a browse and found that there was a section on the early history of the Catholic Church in Newcastle so I consulted the index and then found mentions of Michael in the text.

I have been researching this chap for quite a number of years and built up a collection of data but the only image I had of him was a fuzzy one I found on Trove in a large group of reverend gentlemen.

When I reached page 67 I realised that I needed to grab my dancing shoes for there on the page was a  photo of Michael. While the photo is fuzzy it's a close up that gives me a good idea of Michael's appearance, I'm delighted to have this at last. 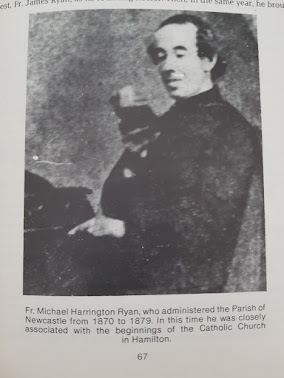 The author of this book that includes many photos, has acknowledged the collections from which he gathered the photos but he does not indicate to which collection the individual images belong. I'm now inspired to search for a clearer copy of the image.