As I had written about Mum's connection with the GPO in Sydney earlier this month I thought it pertinent to reshare this post I wrote ten years ago.

My annual subscription to MyHeritage runs out today so I am madly going through the DNA matches for the accounts I manage there before my access expires. I will probably resubscribe some time in the future when there is a decent offer but I cannot justify the AU $349‎  fee to extend my subscription now.

I am able to use the MyHeritage  subs at a local library or a genealogy society to search the MyHeritage record sets from home so I can't see the value investing in a premium subscription.

My Rabbit Holes of choice today are those MyHeritage Matches, DNAPainter to paint them and the Airtable database I use to track them. 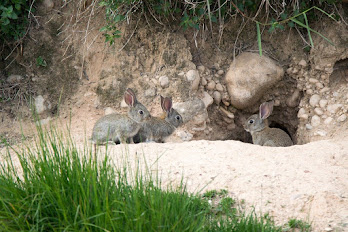 See you at THE Genealogy Show 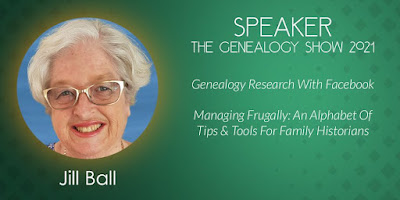 It's only five days until I take to the stage at THE Genealogy Show. I am thrilled to be in the company of so many renowned speakers on THE Show program.

My first presentation, Genealogy Research with Facebook,  is scheduled for 2:00am on the 25th June in the UK but will air at the convenient time of 11am for my genimates on Australian Eastern Standard time.

My second gig, Managing Frugally: An Alphabet Of Tips & Tools For Family Historians, is scheduled for 10pm on the 26th June in the UK and will air at 7am on Sunday the 27th August for those on Australian Eastern Standard time.

Don't worry if these times aren't convenient for you as the recordings will be available on demand for the 30 days of THE Show.

If you haven't already done so grab your tickets here:  https://www.thegenealogyshowlive.com/register/the-genealogy-show/

Posted by GeniAus at 5:37 PM No comments:

Browsing through some snaps of one of our last overseas holidays I cam across this image of Deadmans Lane in Rye, East Sussex.

Such a pretty image for a place with such a deadly name. This post on Flickr gives an explanation for the naming of this thoroughfare.

And why was I in Deadmans Lane? I was trying to make my way to the House with two front doors in which the fictional character, Morton Farrier, from Nathan Dylan Goodwin's series of genealogy mysteries is supposed to reside. 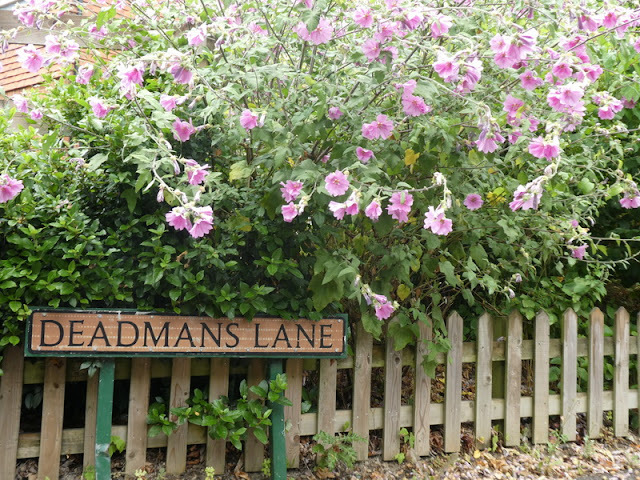 Until today people could sign up to follow this blog by email. Unfortunately the service that managed this function, Feedburner owned by Google will be discontinued in July.

Feedburner advised that I download my list of subscribers and I have done so. It was surprising to see I had over 1500 subscribers but on examining the email addresses I think many of them are bots and not real people.... but there are a few real people who are ACTIVE followers.

I have added a new icon to this blog that will allow anyone who wants to keep following by email. To subscribe to the new service, follow.it , please click on the green FOLLOW Icon at the top the left hand column of the GeniAus blog.

Having clicked on that icon you should be directed to this URL: https://follow.it/geniaus?action=followPub where you will be required to enter your email address then click on Follow.

You will then be directed to confirm your subscription using the email account with which you subscribed.

Hopefully this process will deliver a notification to your email address whenever a new post is published on the GeniAus blog.

An early morning zoom with Ancestry

From time to time the bods at Ancestry.com invite groups of genealogists along to online briefing sessions. As someone who doesn't like getting up at dawn I miss most of these events.

Today's event was repeated - one session was at 2am my time and the other 7:30am. I signed up for the 7:30am session in case I was conscious by then. Fortunately I was awake before 7am so I grabbed my laptop and earbuds from my study and crawled back under the covers.

On logging in I saw several familiar faces from Australia, New Zealand and the US. The session was hosted by Crista Cowan accompanied by a team of Ancestry tech guys. I was pleased that I attended because the session focused on the Ancestry mobile apps which I had installed as soon as they were released.

Pre-Covid I often used the Ancestry App and the AncestryDNA app on my Android phone but, while
homebound over the past 18 months, I have only used the desktop application to communicate, collaborate and research with Ancestry. I was impressed by the demos of all the new features in these apps. The functionality has improved heaps and many new features have been added, these apps now appear have most of the features of the desktop product. The tech guys online took note of the user comments in the chat and will consider points raised for further development.

I must have been sleeping under a rock because I was unaware of the Ancestry widgets (one available in Australia, one to come). I thought I'd log into my apps and follow along and install the widget while watching the presentation but I had been logged out of the apps and couldn't remember my password.

My first job after the session ended was to grab my phone, locate my password and log in to my apps. As I wanted to install the Ancestry widget I had to move all the icons around on the screen that has my genealogy apps. With a two-three hour car ride ahead of me tomorrow I have another option to keep me amused.

Ancestry has recognised that many of us live on our mobile devices and has created a fabulous mobile option that will give us access to all our Ancestry data when we are on the move. I'm so pleased I joined in to learn about it this morning.

I have posted this delightful photo of my mother dancing in Martin Place at the end of World War Two several times over the years and knew that it had originally appeared in a Sydney newspaper.

Yesterday I had cause to find the original image and I noted that there was a typed caption pasted on it.
When I teach people how to use Trove I tell them that they can use Trove to date old newspaper clippings by pasting text into the search box. It was time to practice what I preach.
I fired up Trove, selected search in Newspapers & Gazettes category and typed these words from the caption in the search box "Typical of excited Sydney crowds were these crowds who celebrated" then narrowed the results to NSW and 1945.
SUCCESS! How easy was that!
I found the original article with a cropped image of my mother and the revellers with whom she was celebrating.
Thankyou Trove for sharing and preserving my mother's story.

Last week we ventured into the city to attend a function where Mr GeniAus was recognized for being a member of his professional body for fifty years. The compere described my husband as "a sprightly old chap"!

As the function was held in the Fullerton Hotel in Sydney we booked our overnight accommodation there. The Heritage wing of the hotel is the former Sydney GPO where my mother, Elsie Duncan, worked as a telephoniste during the 1940s. On booking in I noticed that the hotel was offering free 90 minute tours of the GPO building so I immediately signed up.

Friday at 10:00am saw us join Tour Guide Alex and three other couples for the tour. We commenced with a little history lesson before venturing out into George Street to look closely at the exterior of the GPO building. Alex asked us if we had ever looked up at the carvings and statuary decorating the building, we all agreed that we looked ahead not up when walking around the city.

Stopping on George Street we raised our eyes and saw Coats of Arms and various other carvings. 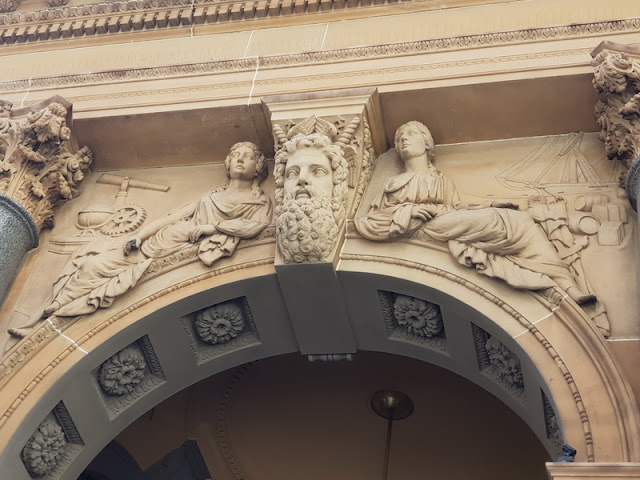 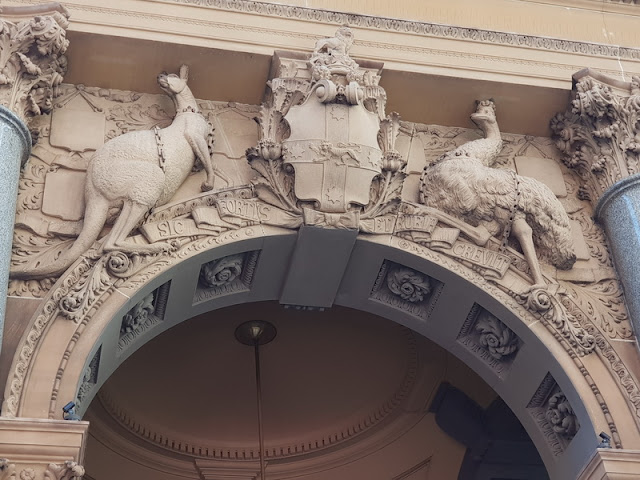 Turning into Martin Place we admired the long colonnade and glanced up once more to admire the many carvings along the facade. Above the entrance door was an impressive sculpture of Queen Victoria. 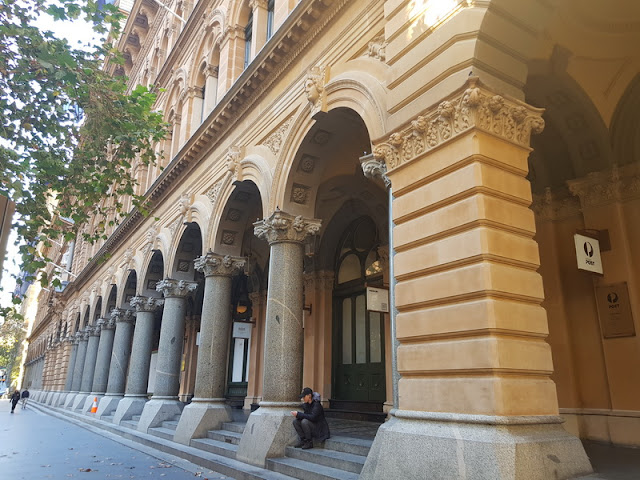 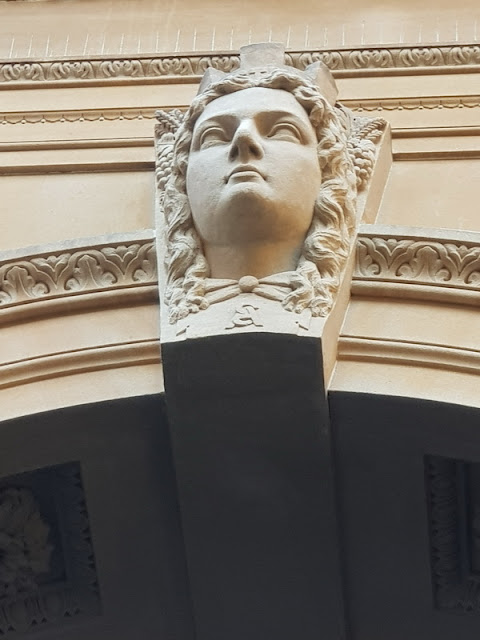 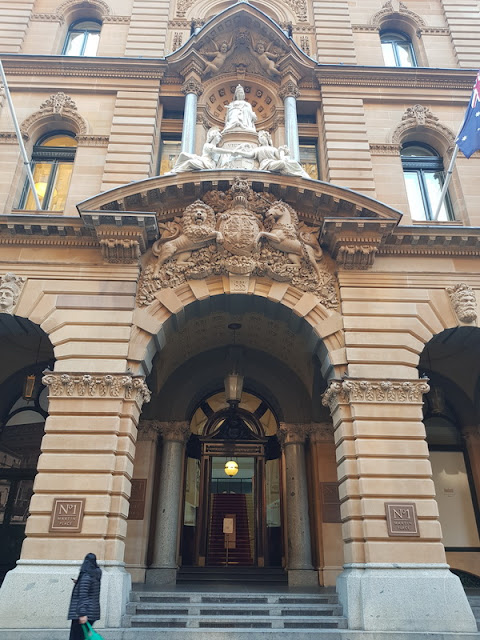 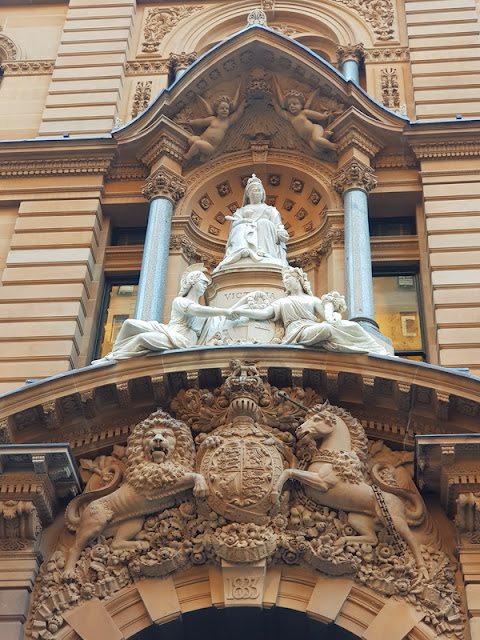 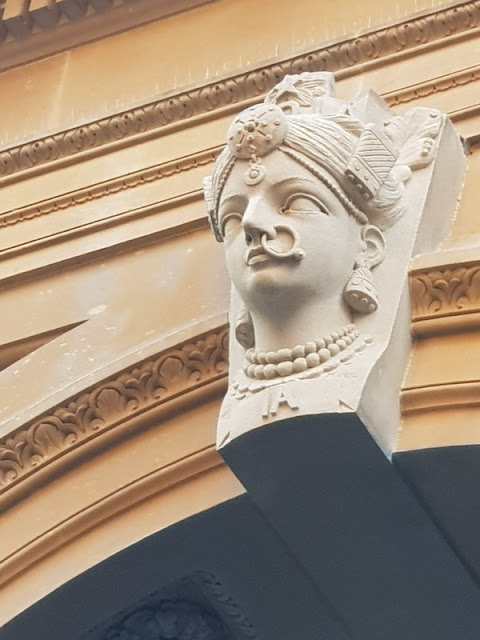 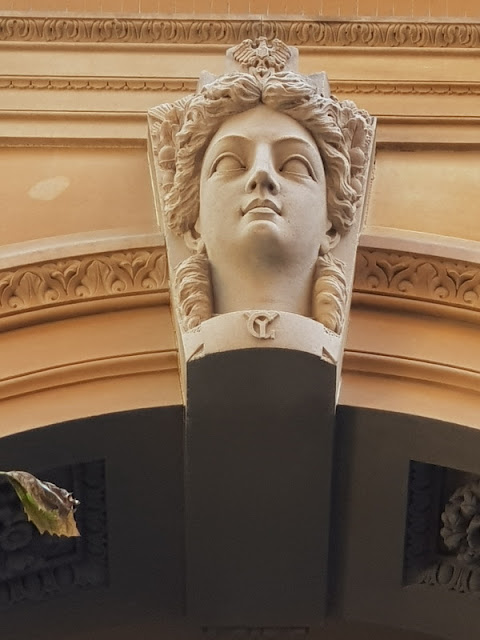 Before turning into Pitt Street we visited an art gallery in the former public telephone area of the GPO. The ceiling in in that room is decorated with gold leaf.

Along the Pitt Street facade we saw some ghost signs, more carvings and the former vehicular entrance. 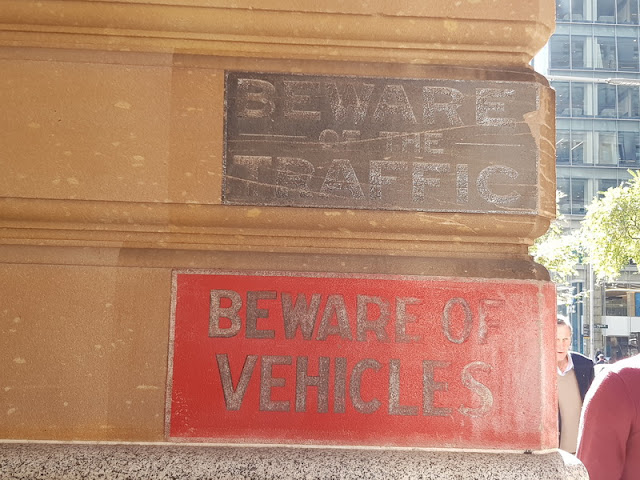 On entering the hotel we stopped to look at the atrium that covers the former courtyard of the GPO. The magnificent replica grand staircase that takes one out of the building under Queen Victoria's sculpture  dominates the northern end of this area. 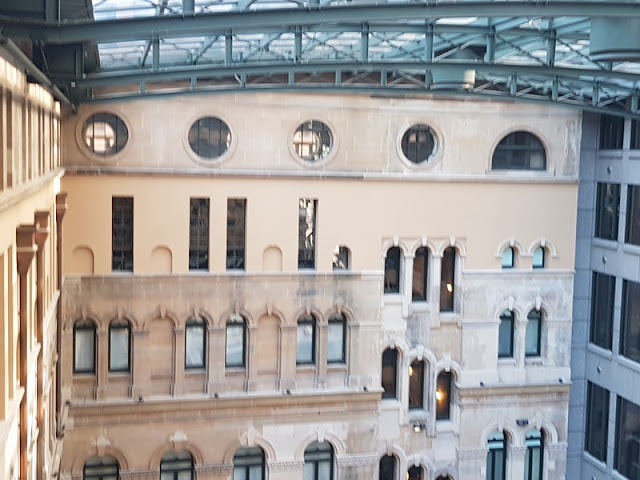 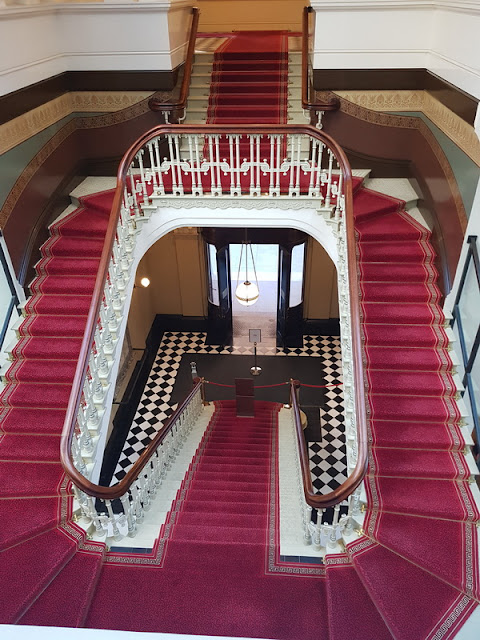 On the first floor of the old building we saw the rooms where the telephonistes worked. The males on the western wing and the females on the eastern wing. These rooms are now used as function rooms. Standing in the area where my mother spent her days was spine-tingling.
Did Mum have a good view from these windows as she fiddled with the cords and plugs on the switchboards?

Last stop on our tour was the basement of the old GPO building where the horses were stabled and where the Tank Stream was encased in a concrete pipe.

I hadn't thought much about the work Mum had done at the GPO until I saw some old photos of telephonistes at work in the basement audiovisual display. 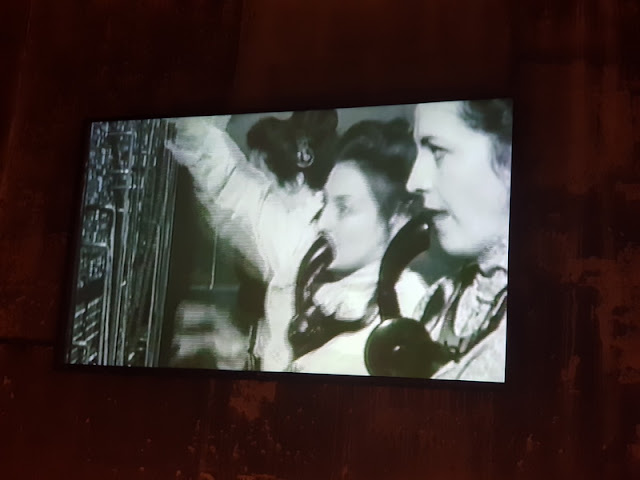 The purpose of our trip to the city was for Mr GeniAus to reflect on his long and successful career, I am so proud of his achievments. The unexpected outcome of being able to walk in Mum's footsteps topped off  our excursion to the city. 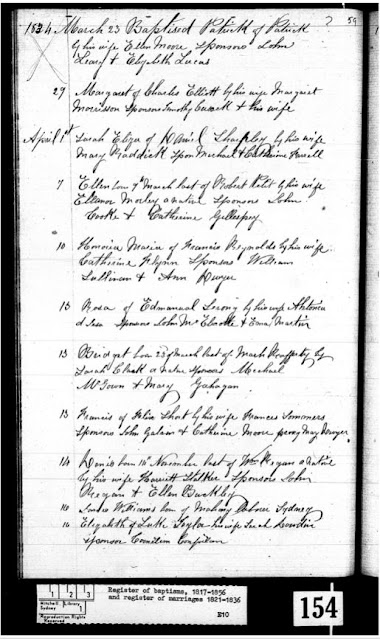