I am over the moon. From time to time I have been posting unidentified photos that I find in family albums in a series called "Do you Know?" 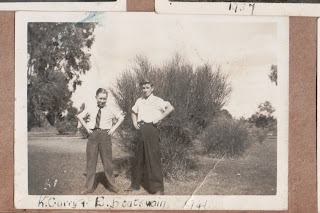 Just a month ago I posted Do you know E Boatswain? and this morning received a comment on that post from a gentleman who lived near my Father's family in Waddell Street, Canowindra and who said " I feel sure that Earnie Boatswain who lived in Ferguson street is the person pictured. His parents were Earnest and Emma."  The  respondent also gave me some further information in his post that confirmed the name of the school my Uncle Kevin attended and the name of a girl Kevin dated. I wonder if this gentleman has any stories about my Dad, Allan John Curry.

This is the first response I have had so far from this series of posts but it has given me encouragement to dig into the family albums once more to find more photos for my "Do you Know?" series.

This must have given you great satisfaction and I'm sure you will connect with many more through these posts as more people search for their families online.

Last year I posted an image of Jimmy Semmens, a champion boxer that was in our family's possession. HIs sone contacted me and I have now given the photo to him. He was very excited as he didn't have an original photo of his father in his boxing attire.

Wonderful to have made a connection this way. Great idea to put unknown photos on your blog.

Congratulations! I went for almost 3 years before I ever had any contact from family or friends of family (beyond that usual family circle) that knew my ancestors. I was ecstatic at that first email. Doesn't take much to make a genealogist "over the moon."

Thanks for this story, Jill. It gives us hope and purpose for putting these types of posts "out there".