The Kettles at Ku-ring-gai 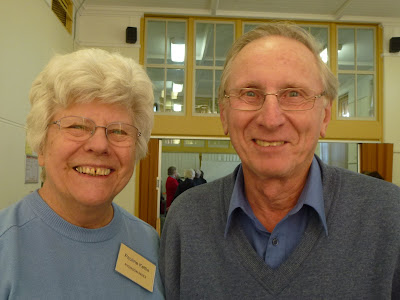 Peter and Pauline Kettle were the guest speakers at Saturday's monthly meeting of The Family History Group of the Ku-ring-gai Historical Society.

The following details were published in the September KHS newsletter.

" Peter has been a long time member of the Sydney Dead Person’s Society,  prior to the beginnings of the Ryerson
Index in October 1998.  Once the Index became established, a Committee was formed and he became Vice President of the RI with John Graham at the helm as President.  Peter took over from John Graham as coordinator of the DPS in Sydney when John moved to Queensland and meetings now
take place at Mowll Village."

"Pauline was born in North Middlesex and lived there until 1961.  She left England for Australia with Peter and family in 1968.  She and her husband have had a shared interest in genealogy for many years.  Like her husband she is a member of the Sydney DPS and is very involved with that group as well as being Secretary of the Ryerson Index."

Peter gave a lengthy talk on The Ryerson Index in the morning session of the meeting. Although most of the audience were users of the index many of us were unaware of the history of the index and the roles of the people who maintain the index. I took considerable notes from Peter's presentation that I hope to publish in a forthcoming blog post.

After repairing to the Swiss Deli for sustenance with blogger, Jenny  I returned for the meeting proper that was chaired by Family History Leader, Jo Harris. Once done with the business of the day Jo introduced Pauline Kettle who read her paper on "Workhouses of England". As there is one ancestor in my tree who died in a workhouse in Dorchester, Dorset I was interested in the content of Pauline's talk and will be looking at the internet sites she referenced in her handout. Most promising of these is The Workhouse site.

The Society has an excellent program of talks and events. While there on Saturday I registered for "Sahibs, Nabobs and Boxwallahs–Europeans in India, 1600–1947" with Sylvia Murphy, "Familysearch.org" with SAG vice-president, Vicki Eldridge  and an Irish Day with Terry Eakin. Visitors are welcomed at these events. For further details contact the Society.
Posted by GeniAus at 9:09 AM

My paternal line was in and out of the workhouses in Penkridge Union (Staffs) and Hackney (London). Some of the children were born there and more than a few of them died there.

I have had recent correspondence with Pauline regarding my library service contributing to the Ryerson Index. She has been more than friendly and helpful. I also sent her some old pages from a 1954 "Sun" Melbourne newspaper which was donated to the library - the good volunteers at the Sydney DPS promptly worked on it and put it online. I am supervising a volunteer in the library with Asperger's syndrome and we have started on "The Heidelberg Leader" this week.

Isn't it wonderful to be able to trace all those generations of family history? Ku-ring-gai is really lucky to have such access to these records, it makes me wonder what kind of storage system they have for all that information!