A Boring and Unbalanced Diet 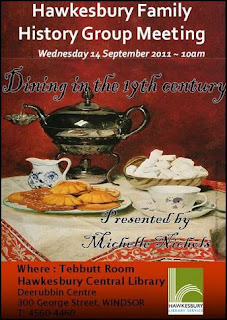 In her well researched paper "Dining in the 19th Century" Michelle discussed the food eaten at various times during  the century. In the early part of the century the food was scarce, the diet boring and unbalanced and the people malnourished, she gave examples of the rations given to convicts, women and children in the early days of the colony. The main activities at this time were milling, baking, brewing and salting. As the colony grew local crops and herds of stock were developed and diets improved..

Michelle described the development of kitchens and food technology through the century using historic images on her slides. She shared some recipes, some of which like roasted and preserved emu sounded quite unappetising. Michelle used Mrs. Beeton's Book of Household Management, the 1864 Colonial Cookbook and recipes published in early newspapers to give us an idea of what would be in a mid to late19th century menu.

I learnt a lot from Michelle's talk. Most importantly it caused me to reflect on the challenges my earliest convict ancestors would have faced and added to my knowledge of the conditions under which they lived.