I had always wondered why my grandfather, Frank Duncan, walked off his 33,000 acre property, Elsinore near Cobar in the 1930s. In 2012 my mother told me that life was challenging on the property; my mother says her father wasn't suited to the hard work required "he was basically lazy". He may have been lazy but I now know there was a more valid reason for his departure.

Trove served up my answer this week. I knew there had been a bushfire in January 1932 but I did not realise the extent of the damage until I read the following report:

30,000 of the 32,900 acres on the property Elsinore were burnt out. I don't know what stock losses were involved. As more newspapers from the district appear on Trove this information may come to light. Reports in the newspapers described the futility of the situation.


This paragraph brought a tear to my eye "Many small squatters have been completely ruined.They cannot afford to rebuild their fences, let alone contribute to the fire-fighting fund." I thought of poor Frank, father of five, whose dreams for the future were probably in tatters.

The following article describes how Diggers who had fought in the First World once again fought against a new enemy. 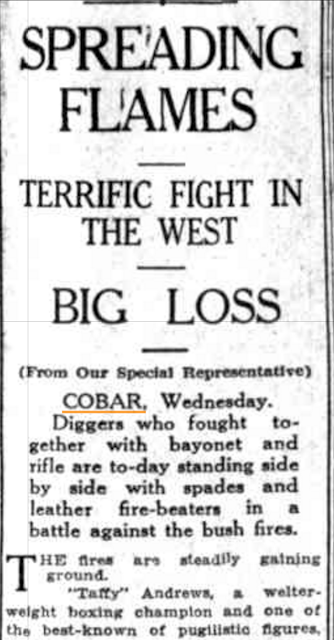 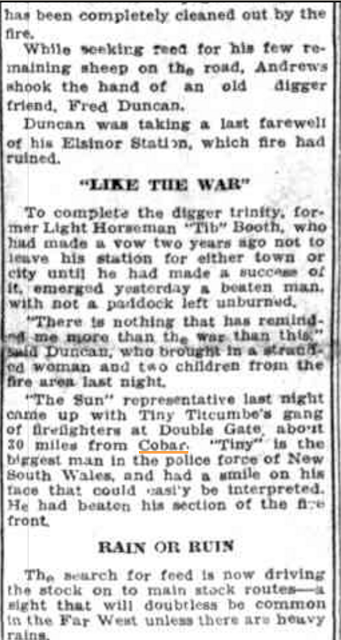 And there it was the phrase that told me why Frank had deserted his property 'Duncan was taking a last farewell of his Elsinor Station,' which fire had ruined. ' The person cited in this article was not Fred Duncan but my Grandfather, Frank Duncan.

Frank summed up the gravity of the situation when he said "There is nothing that has reminded me more than the war, than this".

Thank you Trove for shedding light on our Grandfather's story.

Full text of above article :

Diggers Stand Shoulder To Shoulder Again
SPREADING FLAMES TERRIFIC FIGHT IN THE WEST   BIG LOSS
(From Our Special Representative)
COBAR. Wednesday.
Diggers who fought to gether with, bayonet and   rifle are to-day standing side by side with spades and leather fire-beaters in a battle against the bush fires.
THE fires are steadily gaining ground. . 'Taffy' Andrews,' a welter weight boxing champion and one of the best-known of pugilistic figures,   has been completely, cleaned out by the fire.
While seeking feed for his few re- maining sheep on the road, Andrews shook the hand of an old digger friend, Fred Duncan. Duncan was taking a last farewell of his Elsinor Station,' which fire had ruined. '         '
LIKE THE WAR '. To complete the digger trinity, for mer Light Horseman 'Tib Booth, who had made a vow two years ago not to leave his station for either town or city until he had made a success of it, emerged yesterday a beaten man, with not a paddock left unburned.   'There Is nothing that has remind- ed me more than the war, than this" said Duncan who brought in a strand- ed woman and two children from thefire area last night ? 'The Sun' representative last night came up with Tiny Titcumbe's gang of firefighters at Double Gate. about 30 mllca from Cobar. 'Tlny' 'is the biggest man in tho police force of Now South Wales, and had a smile on his face that could easily be interpreted. He had beaten his section of the firefront . RAIN OR RUIN The search for feed is now driving the stock on to main stock routes - a sight that will doubtless be common in the Far West unless there are heavy rains. A mob of 9000, In charge of drover J. Stead, is located at Mopone, nine miles along the Bourke-road from. Cobar, and another of 12,000, muster-   ed by Mr. W. -.range, is held up at Sixteen-mile tank, Lerida. Many of the -sheep are singed black. Pad- dington, Keewong, and several other private wires are down and communi- cation is cut off. The question naturally asked is,'Where will it all end?'   It is answered simply by experienced bushmen and graziers — 'Rain or ruin.'
Posted by GeniAus at 9:00 AM

There is always more to the story..glad you know more about your grandfather's plight, than just the label of him being lazy.
Very hard times indeed.