When we were in Mumbai recently we did a tour called Religious Beats which took us to the places of worship of several religions practised in the city. I chose that tour because I felt that it gave us an insight into the culture, beliefs and practices of the people in that city.

Today, as one of the Rootstech Ambassador perks, I was privileged to go on a tour of the new Provo CityCenter Temple before it is dedicated and becomes closed to the general public. It was worth getting up early and being driven through the snow in a Mormonmobile along the freeway to Provo, Utah. We Aussies in the van oohed and aahed all the way to Provo as we were treated to some spectacular scenery. 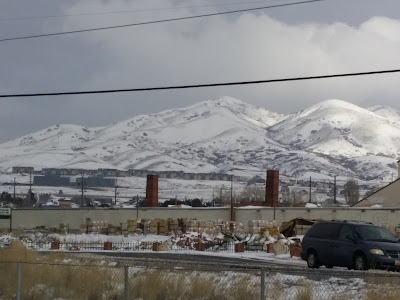 We moved quickly along the queue to enter the Temple. We were ushered into a studio where we were issued with disposable overshoes like one gets in a Russian Museum and were shown an introductory video. Then is was time to visit the Temple. I had expected the Temple to be like most churches but I was so wrong.

Spread over three levels the Temple or  House of the Lord  is made up of many small and several medium sized rooms where particular religious services such as baptism, marriage (sealing) and instruction are performed. On our trips up and down those flights of stairs our guide explained the use and significance of all these rooms  and patiently answered our questions. I now have a greater  understanding  of the Mormon Faith.

The craftsmanship and decor in the Temple is of the highest quality with many artworks, friezes and frescoes adorning the walls. The custom made cream embossed wallpaper is a replica of  a design from the 19th century and is just magnificent. The timberwork in the floors, doors and furntiture is of the highest quality. The architectural hardware is made to unique designs. The furnishings  are beautiful with fine embroidered silk and plush velvet coverings and fine timber. I have visited a few fine old European buildings in my travels and found the quality of the decor  in this Temple to be comparable. we were not able to take photos of the interior of the Temple but believe that some can be found online.

After our visit we had a photo taken in front of a picture of the exterior of the Temple, this was promptly emailed to us to share. We then had a short wander around the exterior grounds but didn't stay long as snow was falling and it was mighty cold. 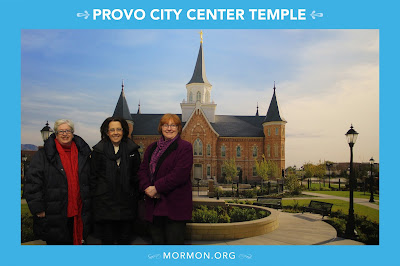 Thank you to the people from Familysearch, Jim Ericson our driver and our guide whose name I forgot to record. As I enjoyed my Religious Beats tour in Mumbai so I did the Provo Temple tour.
Posted by GeniAus at 5:34 PM