"If you had convicts between 1810 and 1821 it is likely they could have been affected by Gov Macquarie's building program.

As part of History Week theme "Faces in the Street", George Parsons Adjunct Assoc Professor Macquarie Uni will be giving a free lecture at Hornsby Library  titled  "Construction, Convicts and Capitalism: one face of Governor Macquarie." The talk is hosted by members of the Convict Trail Project
.
A few of my convicts arrived during Macquarie's reign and two of them worked on a Macquarie project, the construction of the road over the Blue Mountains, so I RSVP'd and went along to see what the Prof had to say. 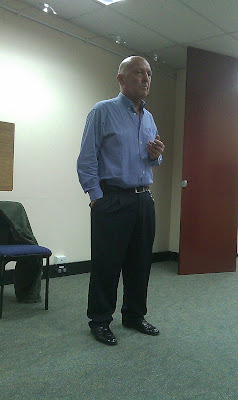 Professor Parsons presented in a relaxed style with touches of humour an interesting portrait of Macquarie and his times. He indicated that ecomomic and environmental conditions of the times were catalysts for some of Macquarie's works.

I hadn't given much though to this early governor I just knew that his name is on many Sydney institutions and roads.

Although Professor Parsons is an academic his talk had general appeal. I learnt that Macquaire's job in the colony was to restore legitimate authority, reestablish the food supply and to develop the fabric of the colony ie road, bridges and buildings including the commissariat.

Because of a number of natural occurrences such as drought, floods and caterpillar plagues Macquarie found that he had a lot of idle convicts on his hands. To employ these souls gainfully he embarked on an ambitious building program during which "many grand buidlings ahead of demand" were constructed. Macquarie was to incur the wrath of the British Government due to the funds he spent on these projects.

Although I love technology it was refreshing to attend a talk where the speaker spoke off the cuff with mininal reference to notes and without a powerpoint slide in sight.

Thank you Elizabeth Roberts and people behind the Convict Trail Project  for organising this lecture.
Posted by GeniAus at 9:49 PM