My new glasses just don't seem to be doing their work as my eyes are very tired......but the bounty received has made the discomfort worthwhile. 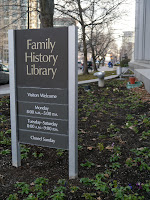 Together with Mr Geniaus, my research assistant, I spent quite a few hours at The Family History Library looking for info about his 3 x Great Uncle, John Gowans, who moved from Scotland to New York around 1860. We are particularly interested in locating any descendants.

As time is short I printed out all the information I have on John and his two children and told Mr Geniaus to ask one of the mob of consultants/volunteers in the library for assistance while I set about other tasks. After talking to three helpers who were very friendly but not too fmiliar with New York records Mr Geniaus realised that he could search the catalog all by himself.

While I found a number of references in newspapers and directories and to John and his son James Mr Geniaus found some promising microfilms and repaired to the US Floor to take a look at them. Bingo! He found three death certificates: one for John, his son James and his wife Anna Bouton. I just googled the cemetery, Green-Wood in New York, in which Anna and James are buried and found that thye have a database of burials on their site. I now have the location of their shared grave. I am sorry that I am not visiting New York on this trip - I guess we will just have to return to visit the graves.

We already knew that there was a daughter Mira or Maria who we have found on three censuses, the latest being 1900 and was hoping to find either a marriage,

Excellent team work! I just hate having to wear glasses all the time now I have reached that magic age. It would be so frustrating to still struggle when you do have them.Thank goodness for research buddies :) I hope your tired eyes recover soon.

My husband also has ancestors in Green-Wood and I love searching on their site. You can also write to Green-Wood for the burial records. Would also love to visit the place some day - apparently it's huge.

Unless it is totally inappropriate, I am offering my service as a photographer for you both when we visit Green-Wood in March.

My Husband is a Revolutionary and Civil War buff, and intends to visit "Battle Hill" which is at Green-Wood, before we head to South Carolina and various other places (all civil war related)

As this topic (now) bores me to death, I would be pleased to have some thing that is of interest to me to occupy my time, rather than just trudging around yet another battlefield, taking photos of monuments and cannon - been there, done that (2,500 miles and probably even more photos of them in 2008)

My reward is 10 days in Hawaii on our way home in May!

Such good planning to take a research assistant with you!

Linda, That is so generous - would be awesome.

When I originally commented I clicked the "Notify me when new comments are added" checkbox and now
each time a comment is added I get four emails with the same comment.
Is there any way you can remove people from that service?
Appreciate it!
Feel free to surf my web-site : matt carter

wonderful points altogether, you just gained a new reader.
What may you suggest about your put up that you made some days in the past?
Any sure?
My website : xe forex