My mate Shelley over at TwigsofYore has issued a challenge for Australia Day 2012.

Unfortunately in spite of all of their toil none of my ancestors was rewarded with wealth in the monetary sense. Rewards came in the form of happy lives and healthy families.

My grandfather, Frank Duncan, seemed to move from job to job in the country town of Cobar. As a young man he worked as a miner in Cobar's copper mines. After returning from World War 1 he purchased a station (very large farm) of 32,000 acres, Elsinore, outside of Cobar. He walked off this farm sometime during the Great Depression.

From that time on he tried a few jobs. He had a catering truck that  he drove around the countryside to feed the crowds at race meetings and other gatherings. From this van he sold his home made pies and the ginger beer he brewed.

Together with my grandmother, Ethel Jane Pusell, Frank ran a cafe in Cobar. I am not sure how long this venture lasted. Frank eventually went to work at the Post Office. He rejoined the Australian Army in 1940 but did not see active duty. When the family moved to Sydney in the 1940s Frank worked at the Kensington Post Office. I am not sure what work he did there but I think he may have driven a van.

Frank was a proud man, the major source of his pride was his five daughters "The Duncan Girls" who were very fond of their "Dadda". What they lacked in material wealth was made up by the richness of the happy family life that they enjoyed up until Frank's early death at age 53. 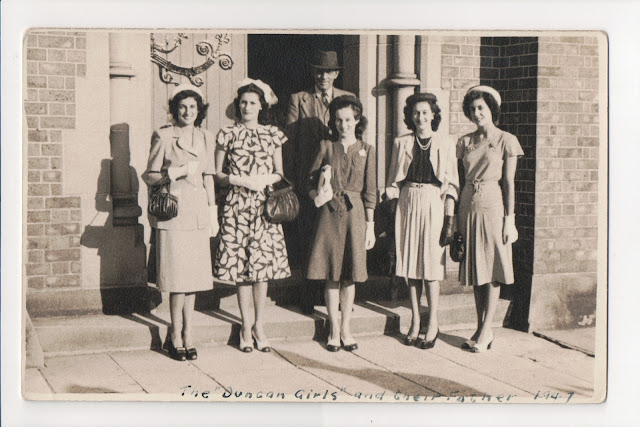 How sad to have had to walk away from the family farm. It is difficult to imagine how hard times must have been during the depression. Reminds us how lucky we are now.

I love the photo of the catering van and its advertising. Photos of families and vehicles are among my favourites.

Doing it tough economically then to die at age 53....very tough. Love the advertising.

Such a wealth of love and such beautiful daughters! You have a wonderful collection of photographs. I especially love the one of the catering van. So good that this piece of history has survived in the form of your photo and story.

He must have been proud of his five girls and I like the photo of the catering van too.

I saw this post earlier today but was too busy writing my post to comment. Now I can come back and really enjoy it. I didn't click through your links before. I really like the way your family information is set up. Is that a special software program you use? And I like the use of mapcarta....most of my time today was spent trying to locate places - particularly one using longitude and latitude. Now I think I need to go back and reference and edit my post yet again!!! Alex

A lovely set of photos and a very sad end,to die aged 53 years after a hard life. Love the advertising of the catering van, there is a sense of innocence about it.

Hi Jill, I'm finally getting around to doing more than skimming all the posts! Thanks for participating and promoting.

What fantastic photos you have! I do like seeing that all these names and dates are actually real people.