One of the best birthday presents I received last year was a voucher for a bookstore because it forced me to buy books. If I'm given a more general voucher I'm likely to buy another kitchen gadget or piece of clothing that I don't need....but we always need books.
I took myself off to Dymocks in the city, one of our bigger Sydney bookstores and had a wonderful time browsing and investing my $50 voucher.The first book I selected was Lost Relations by Graeme Davison. My second purchase was an autographed copy of Magda Szubanski's memoir "Reckoning". Magda is a comedian and an actress best known for her role as Esme Hoggett in the film Babe  so I expected a funny book, a light hearted read. I didn't get what I paid for, I got much more 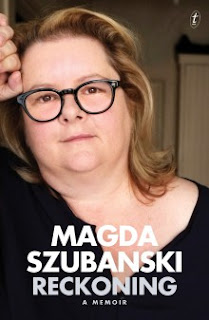 Why I am blogging about this book on my genealogy blog is that Magda spent a lot of time telling her family story in Poland and Scotland and discussing the influences her grandparents and others had on her. There was a delving examination of Magda's relationship with her father which was a çentral theme throughout the work.

Magda devotes several pages to a discussion of her feelings when she was the subject of a Who do you think you are? program. It is interesting to read how she was affected by that journey.

The serious tone of the book in which Magda openly discusses the emotional turmoils she has dealt with during her life was a surprise. It came across as a very honest, warts and all, recount. There were touches of humour many of which would resonate with Catholic schoolgirls.

A reviewer described the language in this book as "eloquent and moving". I had not expected to find such a well written book and was surprised and delighted at the quality of Magdas writing.

When I purchased this book it was only available in hardcover and was quite expensive although I got it at a special price.  I'm not suggesting that you run out and pay nearly $50 for this book but if you see it in your local library you might borrow it. It promises so much more than a litany of recollections from a funny lady.
Posted by GeniAus at 10:30 AM

Hah! 74 reserves on the physical item so I've put in a reserve on the electronic version as well.

No wonder there are so many reserves - it's an expensive tome. If you were a little closer I'd lend you mine.

Glad to hear you found it so interesting as my hold has just become available over the weekend from my wonderful public library.

The book is on my TBR (to be read) pile which is quite lengthy. I agree with the price though - way too dear!