From Cave to Chapel

This post first appeared on The worldwide Genealogy blog on 3 March 2016.
In one of my early posts on this blog I talked about W's, Who, What, When, Where and Why.

Today I am returning to Where, but not the where of my ancestors, it's the where of the place where I do most of researching and connecting, I call it my Geneacave. My issue is that I need a new name for my hideout.

We are empty nesters so I have a few choices for an office. For several years I used the small fourth bedroom but, after a while I found myself drowning in a sea of paper, files and techno toys so Mr GeniAus suggested that I move into bedroom 3 which is slightly larger. Bedroom 3, however, while it had more space only had a small window and didn't have much natural light (no good for webinars and hangouts). I worked happily there for a few years. 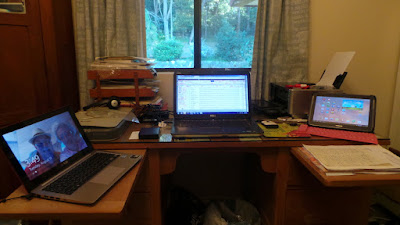 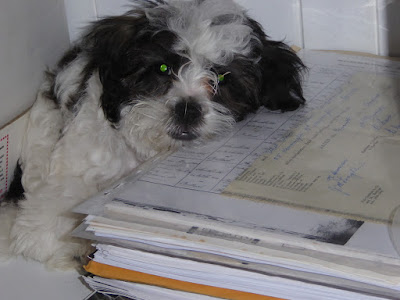 Paddy the Pup was happy in Bedroom 3

Late last year, as we were getting rid of the paraphernalia that comes with small grandchildren I thought about the living room off the kitchen which we had dubbed the toyroom. It's a big room with two large windows and natural light, it's away from the bedroom zone and near the living end of the house, the router, kitchen and over a hall from Mr GeniAus' study and an external door. I made an executive decision that I would move on to there. 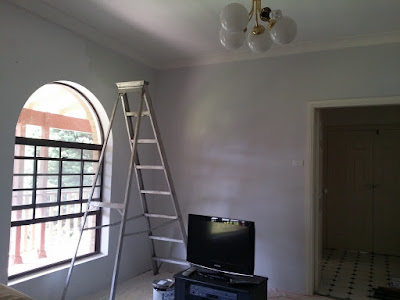 Mr GeniAus Painted the new digs while I was at Rootstech

I am loving my new accommodation although it's taking me a while to move and sort my gear. I have set Easter, when the family visits, as the time I will be done. Paddy the pup who used to sit in a bookself in the last Geneacave has happily found a nice spot at my feet under the desk.

My problem is that the term Geneacave. just does not fit. I am wondering what I should call my light and airy new digs. 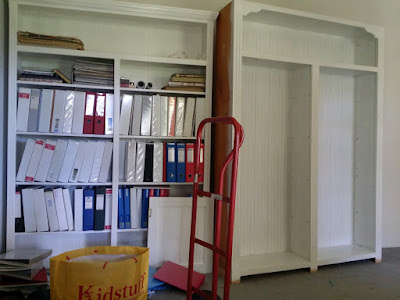 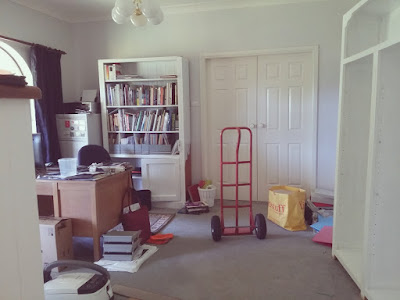 What is your Where? A Geneacave or a Geneacorner or a Research Zone???

I may call my new room the Chapel because Genealogy is my religion!
Posted by GeniAus at 1:30 PM