"As we lived in a a flat my dinky, scooter and bicycle with training wheels lived at Nana's. I spent many happy Sundays tootling up and down the garden path and the footpath in my vehicles."

That quote from a recent post of mine resulted in a question from one of my readers, Kylie. "What's a dinky, Jill?"  I responded "A very small tricycle for pre-schoolers. I have a picture of my daughter on her Cyclops dinky. A Google image search for Cyclops Dinky will bring up some pictures."

As a picture is sometimes worth a thousand words I thought I should dig through the family album to find a dinky picture.  I couldn't find the one with my daughter so I am posting this picture from 1977 of one of my boys on his dinky. 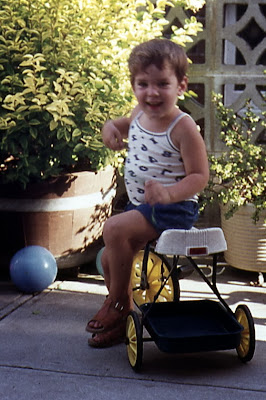 A Google search for the meaning of the word dinky tells me that is has several different meanings today. I wonder if that is why Kylie posed her question.
Posted by GeniAus at 10:01 AM

I wonder if your meaning of dinky is an eastern states thing, as I've never heard of it being used for what I would call a bike, or trike, but my grandparents had one just like the one in your picture.

As for meaning of dinky to me (and possibly South Aussies) that was where you 'dinky' someone on your bike: meaning you are riding your bicycle, and they sit on the handlebars, and you ride along. That's dinkying.

Interesting differences between states wrt language. I knew what you meant but would more likely have used the word as Alona does even though I'm a Queenslander.

I had a dinky and it was handed down to my sibs. We lived in a flat in Mosman NSW so that explains it.

Another NSW person here. Yep, that's a dinky. We occasionally used dinky to talk about giving someone a co-ride on a bike, but the more commonly used word was double. "I gave Bill a double (on the bike)".

So we even have to be careful with language within Australia let alone when writing for an international audience.

Yes I'm with Alona it must be a South Australian thing. We had the little Cyclops dinkies or trikes here too. Thanks for clearing up the mystery! :-)

I'm from Queensland, and my 3 wheeler was referred to as my Dinky, bit bigger than the picture in this article though.