Yesterday we attended a family funeral service for my Aunt, Kathleen Jones (nee Curry) and her burial at Woronora Cemetery on the southern edge of Sydney. As we live on the northern fringe of our city this was quite a trek.

As we drove through the cemetery and noticed some of the older graves I wondered about the history of the cemetery where quite a few of our relatives are buried.

Trove to the Rescue.

Pasted below is part of an article that appeared in the Sydney Morning Herald in 1895. As it is a long article I am just posting a snippet. I am also posting a transcription of the full text of the article.


THE WORONORA CEMETERY.
——◊——
The new cemetery which has been opened at Woronora, close to the Sutherland station, on theIllawarra line, is probably the most systematicallyplanned burial ground in the colonies, and when theusual improvements and cultivation have beeneffected the cemetery's picturesqueness aided by thenatural surroundings of the National Park, will bear avery impressive completeness. For many years theresidents of the southern suburbs agitated zealouslyfor a grant of find for cemetery purposes, and asthe once sparse population began to rapidly swellthe small provision which had been made by some ofthe Churches was not only inadequate, but the burialsbecame objectionable to the community for sanitaryand other reasons. Eventually the LandsDepartment decided to grant a portion of theNational Park for the purpose advocated,and in the beginning of last April dedicated112½ acres as a general cemetery under section 104 ofCrown Lands Act of 1884. The allotment to thevarious denominations was made as follows :—Church of England, 28a. 2r 31p. ; Roman Catholic,19a 0r. 8p. ; Wesleyan Methodist, 10a. 1r. 20p. ;Presbyterian, 7a. 3r. 28p. ; Congregational, 3a. 0r.28p. ; Primitive Methodist, 2a 3r. 7p. ; unsectarianportion, 2a. 3r. 7p. ; Baptist, 2a. 3r. 7p. , Jews, 1a.0r. 32p. , Lutheran, 1a. 0r. 25p. An area of 32a. 0r.33p. is set apart for a custodian's residence, planta-tions, roadway, and a mortuary station, and 2r. 39p.is reserved as a site for a lodge. The space per grave is fixed at 3ft. by 8ft., and as it is estimated that about 1000 can be pro-vided for per acre the burial accommodation of thecemetery, after allowing for the reservations forborder plantations, roadways, &c., will approximate  70,000 graves. Each denomination is representedby one trustee, and there are two trustees for the un-sectarian portion, making a total of 11 persons, whoact as a combined trust for the whole area. Thissystem of trusteeship is a departure from thathitherto adopted. For the Necropolis and mostother cemeteries each denomination has separatetrustees, but it is anticipated that the new systemwill prove both a more satisfactory and economicalone, as the trustees will co-operate with a view toeffecting general and uniform improvements. Thetrustees for the several denominations are :—Messrs. T. S. Schofield (C.E.), John Kelly, (R.C.),    J. Sproule (Presbyterian), H. M'Pherson (Congrega-tionalist), Hon. J. H. Carruthers and Mr. F. S. E.Holt (General and Unsectarian), Hon. H. E. Cohen  (Jews), Messrs. Peter Herrman (Wesleyan), G. Farr(Primitive Methodist), C. Howard (Baptist), C. W.Berghofer (Lutheran). The cemetery will serve thepopulation of Kogarah, Arncliffe, Penshurst, Hurst-ville, and other southern suburbs, where, except in  cases of churchyard burial, the residents have hithertohad to bring their dead into the Redfern station, andthen have the bodies conveyed to Rookwood orWaverley for interment. The Government granteda sum of £1000 for expenditure on improvements tothe new cemetery, and that amount has been ex-pended on having the burial ground fenced in and  cleared, the main road or drive made, trees plantednear the fences, and the different sections laid outand pegged. The only difficulty in the way of thetrustees now is the requirement of a rail-way siding into the cemetery. A surveyfor this purpose was made by the RailwayDepartment, but as no money was voted for thework nothing farther has been done. The cemeteryhas now been opened about three months, andbetween 20 and 30 burials have taken place.
These people who are somehow related to me are resting at Woronora: 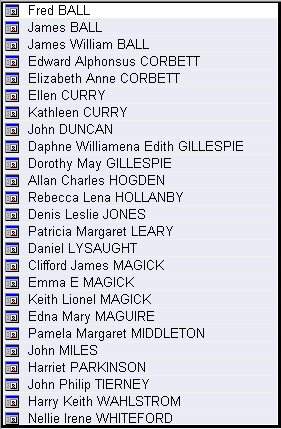 Wow I wish I had that many all in one cemetery Jill.

I didn't realise there were so many, Kylie. I need to schedule another visit.