I firmly believe that one of the benefits of face to face meetings and conferences is the networking
and incidental conversation that occurs at these events. I learn so much about local history, research methods and resources from the people with whom I chat. 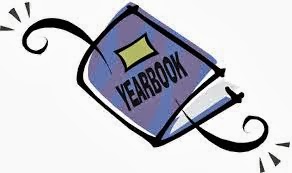 At the recent NSW/ACT Conference in Canberra I sat at a dinner table with two people I knew, one I had heard of and six I didn't know. Once the ice was broken we had a fabulous night chatting about this and that. We had a famous Australian footballer on our table who had been a neighbour of Mr Geniaus many years ago and another lady who was in the same year at the neighbouring girls' school to the boys' school Mr Geniaus attended (I think Mr Geniaus was a little disappointed that he didn't come to the dinner with me).

Jean Campbell, the President of The Botany Bay Family History Society was the lady who went to school at the same time as Mr Geniaus. I told Jean that he was attending the 50th reunion of his class in November and she said that she had some of the yearbooks from his school. They had been given to her and she could not throw them out (genies are hoarders) and that, if he wished, he was welcome to take a look at them. When I got home and relayed the news Mr Geniaus was over the moon as his mother (who didn't have the hoarder gene) had thrown out all his school yearbooks.

Last week I contacted Jean by email and when she responded passed her details on to Mr Geniaus. They have been corresponding and the upshot is that Jean is posting one of the yearbooks that mentions Mr Geniaus to him.

Thank you, Jean, you have made someone a very happy old boy.
Posted by GeniAus at 11:19 AM