When we returned yesterday from a couple of days away (paying attention to living family members) I found several messages on our answering service.

We were thrilled to hear from one of the callers who had left two messagees. It was Mr GeniAus' newly discovered second cousin making contact. I had tracked down her brother via Linkedin and he had promised to give her our details.  As the days went by we wondered if we would hear from her -  she would call when we weren't around. 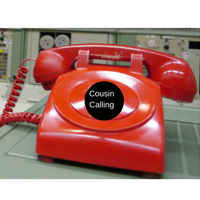 When Mr GeniAus phoned her this morning the cousin had visitors so we arranged to call back this afternoon. She was as thrilled as we were to make contact. She says she is not tech savvy so hasn't used Trove and other online resources. I have found several things about her grandfather and mother that will add to the family history she wrote in 2005. She has photos, documents and memories of her grandfather who was Mr GeniAus' grandmother's brother. What a Win-Win situation.

As she is moving house in two weeks and we are taking off overseas for Christmas we have promised to exchange details via email and will organise to visit her in the New Year - she'll only be a six hour drive away!

It is only because someone had posted some info on this family in an online tree that we were able to find this lady.