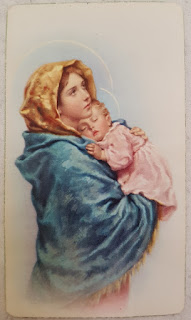 In a bundle of my Dad's stuff I found a memorial card for an Annie Dowd who died on 17th January 1970. On checking my family files I found no information about Annie so I wondered Who was Annie Dowd and if she was a family member. 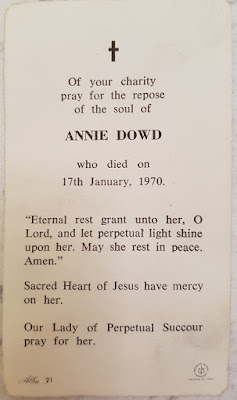 The card gave me a name and date of death and from its format I deduced that Annie was a Catholic. I assume that Annie was someone known to Dad and his family.

My first stop was the NSW Registry of Births, Deaths and Marriages index. There I found one Annie Dowd death in 1970. This looked promising as Dad grew up around Cowra where the death was registered.

Checking out the Australian Electoral Rolls on Ancestry showed that Annie was living at The Rivers, in Canowindra (my Dad's home town) with William Joseph Dowd.

Back at the NSW BDM Index I found Annie's Marriage to William and that her maiden name was Rousch. I remember my grandmother and aunts talking about the Rousch family who were friends and neighbours. I then knew why this card was in my father's stuff as it related to someone in the family network.

It told me her father was John, that she married William Dowd in the Catholic Church at Canowindra and Confirmed that The Rivers was the Rousch family property. It also told me that Annie was known as Doone.

Further hunting in Trove found several snippets about Annie's activities including this photo of her with William Dowd in 1938.

The caption for the photo read "Atmosphere of the Royal Show, With bundles of hay to bed down cattle.Miss Doone Rousch and Mr. W. Dowd. of The Rivers, Canowindra, walk across the  showground. A small army is working at full pressure to dress the Show for to-morrows opening.

So now my curiousity is sated what will I do with the memorial card? I think I will donate it with other bits I have gathered on unrelated persons to a genealogy society in my home state that will  index it and add it to its collection.
Posted by GeniAus at 9:00 AM

I love chasing the unknown as you have done, and I gather you do also..we do enjoy a challenge.
An interesting search..

I just have to identify these things so I can know how to deal with them.