Diving into the too hard basket 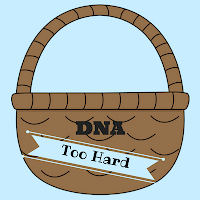 I've invested a few $$$ into DNA tests for family members.

DNA research had been in my gunna pile or too hard basket.  I haven't devoted much time to chasing up connections. I wonder if this is because most of the approaches I made to other folk have been ignored. Added to this I am scientifically illiterate so this DNA stuff doesn't come easily to me.

I only got an MTDNA test for one of Mr GeniAus' cousins - I will add an autosomal test for her. Another of his cousins is only on FTDNA with an autosomal test. I have been talking to her and she kindly given me access to her results so I am adding a Gedcom for her to FTDNA and uploading her results to Gedmatch  (at least Mr GeniAus is assured of one close match then).

As I have been disappointed with the lack of responses I have had from my closest matches I thought about identifying less close matches who might actually answer me. As a first step I downloaded all of Mum's and my matches and combined them into one spreadsheet. That's 2410 matches. I went through these and identified all of the email addresses that were obviously Australian plus a couple I recognised as belonging to genimates. I also identified those who were matches to both Mum and I. I  have started emailing people from these groups.

I am pleased to report a modicum of success. Both of the genimate's email addresses I recognised sent me replies. I have been envious of my genimate Sharn who has found connections with people we know. The good news is that I have a connection with Mr Cassmob, my genimate Pauleen's husband. I suspect that this is way back in Ireland - time will tell.

I had speedy responses from three other Australians I emailed but nothing from the overseas ones who connect with Mum and I.  A new 4th cousin match on my Irish Ryan/Harrington line responded to me. Once this lady gave me her grandparents' names it was easy to place her in my tree. It's such a good feeling when one can confirm one's paper trail with DNA.

There was another surprise in my mailbox yesterday - I got a message from a chap who matches both Mum and me. I responded straight away with some thoughts about where we may connect. I just hope he replies.

After trying to use Genome Mate Pro to track my matches I have left it in the too hard basket for the time being. I am sticking with my home grown spreadsheet. On comparing my columns with those suggested in a post on Kitty Cooper's blog I found that I had only missed two of the suggested columns: "Date – I use the date the Match was made (a sort on this column lets me see the most recent) and Tree – copy in the URL of any Tree or site for your Match’s Tree. I've added those." I also have the matches names in one column but will split these as suggested "Match Name (two columns for first and last names, which permit a sort either way)". I have an additional column for the geographical location of the match. That spreadsheet is just for managing my connections I am still pondering how I'll track matching segments.

I'm wanting to highlight my DNA matches in my Family Historian software and am hoping that some user who is cleverer than me will come up with a solution.

Should you want to see if you are a cousin of mine on Gedmatch please do a one-to one comparison with me T775101 or my Mum Elsie T929154.

Although my dive has been a challenge my vigorous attack on the too hard basket has given me an increased understanding of DNA and yielded some positive results.

More diving is on my agenda.

Great to be a cousin-in-law :) "all" we have to do is dig out the connection.

That may be a long term project Pauleen.

Thanks Jill you have given me hope ;) Will have to try your method.

Thanks Jill as I am also scientifically illiterate I can relate.I've been wondering about the spreadsheet method so thanks for the link. I've received replies from a few matches for whom we can't find the common link.

Good for you, Jill. I have my brother's Y-DNA on the Gillespie Surname Project at FTDNA, and I am waiting for my own autosomal ['FamilyFinder'] test results on FTDNA as well. Yes, there is much to learn, and it makes my brain swim - and I actually love science!! Challenging. Definitely spreadsheets make comparisons and keeping track of contacts - an excellent way to manage the information. Cheers!

Jill what do you want to record from the DNA matches that you have found. It may be that you need to set up a custom attribute in Family Historian something similar to what you might use to record a physical description.

We've done DNA as well, and it is not that easy to understand. My husband has spent countless hours pouring over his results trying to find the Fitzgerald he belongs to in Ireland and he's still at it.

I've done my DNA and I've had my father's DNA tested as well. I had found a genetic DNA cousin (probably 2) but we cannot get the documentation to line up, and the both of the people haven't helped but almost has stopped communication with me. Its very frustrating.

Good luck and glad to see you got some place with it!

We connect! - or rather your mum and I do. I'll drop you an email.

P.S Sorry for mis-spelling your name!

A cousin for Mum and a famous genie at that. Thanks for your message Cousin Sheena.