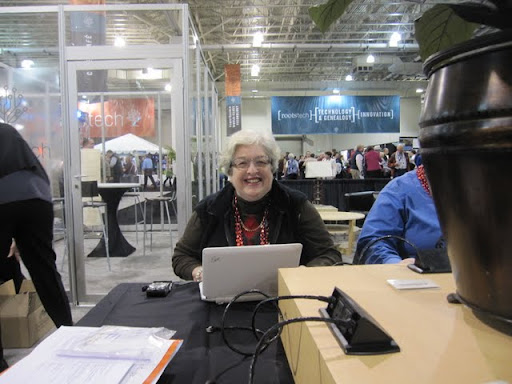 Rootstech Official Bloggers were provided with an area, The Media Hub, in which to work during the Conference. We had internet connections, power outlets, workstations and  two big glass fishbowls: one for recording audio interviews and one for recording video interviews. These were used a lot by the professional genealogists who were busy developing material for their blogs and podcasts. DearMYRTLE has already posted several of her interviews on her blog.  I only had one video interview booked with a gentleman from a British company. Unfortunately he failed to appear for our interview! I  also did a couple of old-fashioned interviews about which I will blog later but concentrated my efforts on attending sessions and tweeting and blogging about the presenters and the presentations.

There was so much interpersonal communication happening in the media space that  it was difficult to get much blogging done there. I am a people person and had not travelled 8016 miles or 12897.74 kilometers to have my head stuck in a computer when I had the chance of talkiing to my virtual pals in the flesh!


I have blogged this photo directly from Joan Miller's Picasa Album Rootstech 2011 Photos.
Posted by GeniAus at 11:13 PM