Shifty Ancestors in The Lucky Country 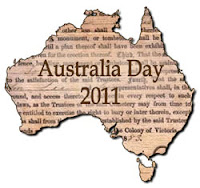 Thanks to Shelley from Twigs of Yore for setting this Australia Day Challenge. Shelley will be putting together all the responses to the challenge and posting them on her website. I look forward to some illuminating reading from those with Australian links.

Meanwhile I haave been procrastinating about which document from which of my convict ancestors I will share. Should it be something from Elizabeth Phipp's shady past or should I share something from one of her partners James Westbrook or William Magick?  I don't know which of these gentlemen is my ancestor as they seemed to fall in and out of favour with Elizabeth. Who was she with when she conceived James Westbrook/Magick my first direct ancestor born in Australia?

Because it deals with three of my ancestors I am going to share an English document from 1812. I have earlier documents that tell of Births, Deaths and Marriages but this document is several pages long, quotes actual words spoken by my ancestors and gives information on the lives they led in London that caused them to be transported to Australia.


What is the document?

The document I have is a faded photocopy of part of Old Bailey Proceedings, 16th September 1812 in which JAMES WESTBROOK ,   ELIZABETH PHIPPS ,   SUSANNAH PHIPPS , and   SAMUEL WESTBROOK , were indicted for feloniously breaking and entering the dwelling-house of   Joseph Covington , about the hour of eight in the forenoon, on the 1st of April , and stealing therein, eighteen gowns, value 3 l. seven petticoats, value 1 l. six pair of blankets, value 3 l. a feather bed, value 3 l. a bolster, value 5 s. two pillows, value 5 s. a time-piece, value 6 l. a silver cup, value 1 l. and five yards of muslin, value 5 s. the property of   Joseph Covington .

As there are copyright restrictions on the reproduction of this document I am only pasting a snip. 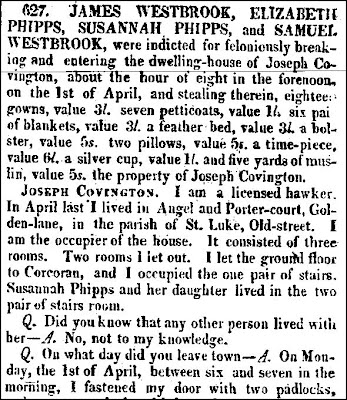 Do you remember the research process that lead you to it? How and where did you find it?

Some time last century, using microform resources at The State Library of New South Wales, I identified my convict ancestors Elizabeth Phipps and James Westbrook. On a trip to the UK in 2004 I spent time at various institutions trying to discover more about them and other ancestors from the Old Country. As part of that visit I visited the stunning National Archives at Kew armed with a list of my forebears and the ships that bore them to Australia.
Mr Geniaus and I were quite bewildered during our one day at this august institution but we managed to find a number of treasures including the transcript of the Phipps/Westbrook trial. The highlight of that day was handling the surgeon's journal for the journey my ancestor Patrick Curry made on the Hooghley. Sadly I did not take photographs of the entries that told of Patrick's episodes of scurvy and their treatment.

How we managed to find the transcript I cannot remember! Today I can find a digital copy of that same transcript from the comfort of my home by searching The Proceedings of the Old Bailey, 1674-1913 online. The typed transcript is, however, much easier to read, do take a look as it is an interesting story.


Tell us the story(ies) of the document. You may like to consider the nature of the document, the people mentioned, the place and the time. Be as long or short, broad or narrow in your story telling as you like!

A reading of the document will tell its story but it told me more than just a story; reading the spoken words of my ancestors from 200 years ago gave me spine tingles. It also gave me more facts and background on my ancestors.

1. I learnt the name of my 4th Great-grandmother, Susannah Phipps (nee Harris) and have been able to find her BDM details.
2. I learnt that James had a brother Samuel Westbrook.
3. Reading Elizabeth's defence tells me that she spoke quite well and coherently. "On the morning that Mrs. Covington left town, she called me down stairs, between six and seven. She said, where is your mother? Why does not she live at home? Mrs. Covington gave me a five-pound note, and two lace caps. I was rather fearful. I would not take them until I went up to Westbrook. I was to deliver them to my mother in Fetter-lane, where she then was. They all deal in stolen property. The things that were moved out of the place were my own."
4. I was able to identify the places of residence of my ancestors in London and have put them on a list to find on my next trip. One such place Woods Buildings (now demolished) was a haunt of Jack the Ripper.
5. I learnt the Elizabeth and James knew each other and were probably living in a common law marriage before they were transported. Another researcher claims they were married and had a child before Elizabeth was transported but the only evidence I can find to support this is from the transcript "The child with them had the key".
6. I surmise that Ann Price was Samuel Westbrook's woman as she gave him an alibi.


Elizabeth, James, Susannah and Samuelalso got a mention in The Criminal recorder:or, Biographical sketches of notorious public characters, including murderers, traitors, pirates, mutineers, incendiaries ... and other noted persons who have suffered the sentence of the law for criminal offenses ; embracing a variety of curious and singular cases, anecdotes, &c, Volume 2 (Google eBook).

I am fascinated by the life of Elizabeth Phipps and was thrilled when I came across the transcript that told me so much about her and her environment in early 18th century London. Elizabeth, widow of William Magick, died as a respectable married woman in Richmond, NSW on August 8, 1869.

Due to the deeds of my ten shifty convict ancestors (and a few who were upright citizens) Australia was ordained as my birth place.

As I celebrate Australia Day I will reflect on the courage and determination of past generations who triumphed over a harsh environment. I thank them for their contributions to to our nation and for paving the way for my family to live a charmed life in The Lucky Country.
Posted by GeniAus at 8:25 PM

Thanks Geniaus for your contribution to the Australia Day blog posts. I have had a very interesting morning reading through them all!

What a fascinating document Geniaus! It was the type of thing I was hoping to find for my one and only convict but couldn't.

Great post Jill. I love finding convict documents and I only wish I had a convict of my own, Maybe some day I will!

Great post, and love the Old Bailey ... another fantastic resource.

Thanks Geniaus for your contribution to the Australia Day blogging. It would not have been the success it was without your help.

It's great when a document holds the detail you want, and more! I have a few that did, but nothing to this extent.