The Bambino delivered me safely to Kingswood on the western outskirts of Sydney in plenty of time for the open day at State Records NSW yesterday. 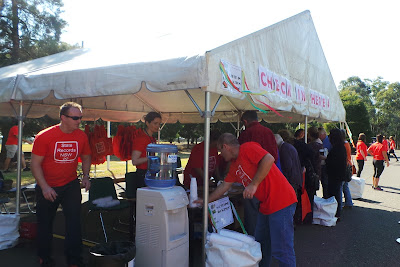 It was easy to identify the State Records NSW staff in their red T-shirts. Visitors formed a tidy line at the registration tent where they were issued with their tickets for the talks and tours of the day. That I had brought my tickets and their QR codes along on my tablet proved to be a little bit of a challenge for the lady who helped me but once she got the knack of scanning the QR codes with her iPad we were in business. Perhaps next year the techno-whizzes at State Records might come up with some method of automating the printing of tickets so that the poor people at registration do not have to write tickets out by hand. As I was bright and early I took the opportunity to wander around the exhibitions and stands that were set up in the grounds at State Records. The first people I came across were from the Australian Ex-military Vehicles Collectors Society. When I asked these two larrikins if they had a website they replied in the negative and told me they were looking for a volunteer to set one up. I took off before I became that volunteer. 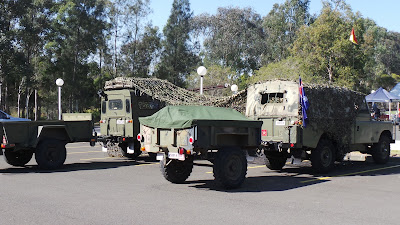 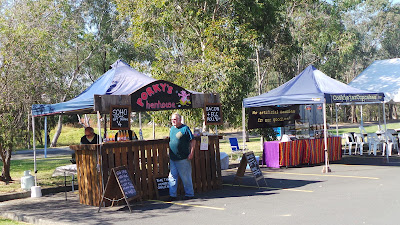 I had packed a peanut butter sandwich for my lunch but when I rounded the corner and saw the food stalls I decided to be a naughty girl, ditch my sandwich and buy a gozleme. 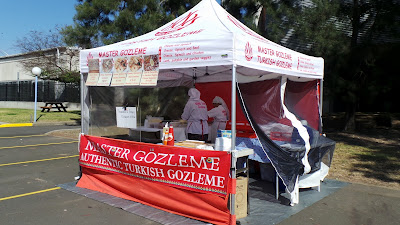 When I returned to the gozleme stall at lunchtime and saw the huge queue I realised how wise I had been to pack my peanut butter sandwich. It was yummy.

Further on in a marquee were tables with representatives from a number of relevant institutions and organisations. The man from Charles Sturt University Regional Archives was impressed but I was already following their new blog. 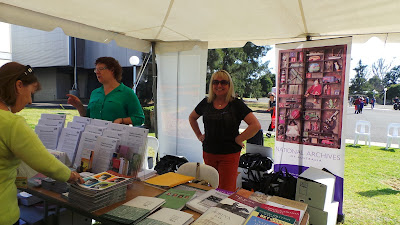 There were people from the National Archives in Canberra on hand to give advice. 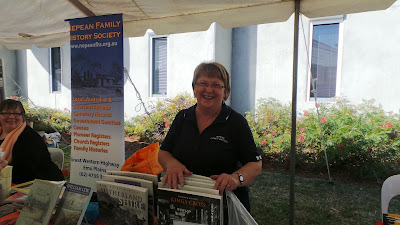 The smiling ladies from the Nepean Family History Society were busy fielding enquiries. 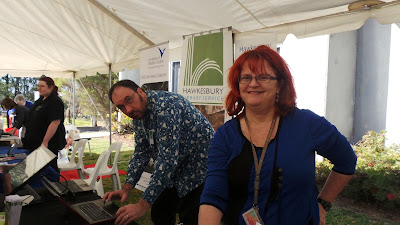 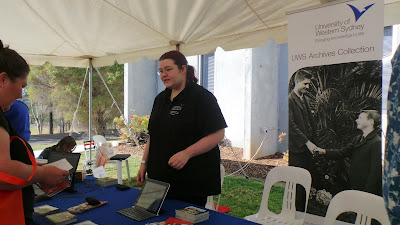 The staff from the University of Western Sydney Archives Collection only had to cross the road to take part in the days activities. 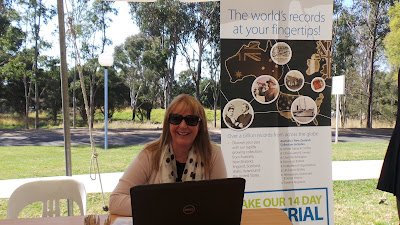 FindMyPast Australia were in attendance but their major competitor was nowhere to be seen. 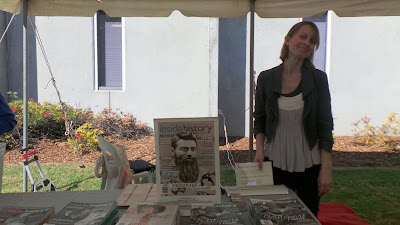 The delightful Cassie Mercer from Inside History Magazine is a great supporter of family history events.It was lovely catch up with her. 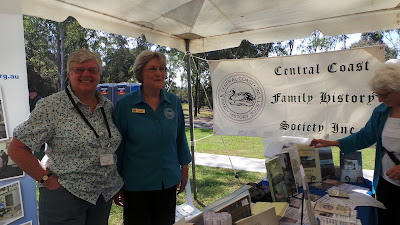 I was able to renew my acquaintance with the members of the Central Coast Family History Society where I presented a talk on blogging earlier in the year. 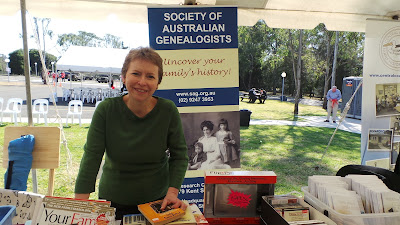 Another familiar friendly face was that of Heather Garnsey from The Society of Australian Genealogists where I am a member. I parted with a bit of my pocket money at this stand. 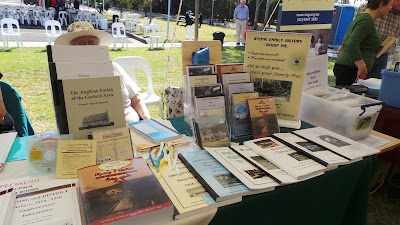 I caught up with the group from Wyong Family History Group and was pleased to hear that one of their members will be joining the Unlock the Past's 4th genealogy cruise in February. 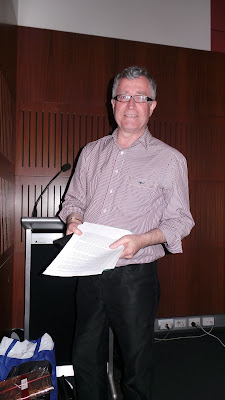 The first talk I attended was "Distant and Dangerous" with Professor Gary Sturgess who read a beautifully written and well researched paper in which he challenged us to think about the ships that brought our early convicts to Australia and the journeys they made as they attempted to travel back to England. 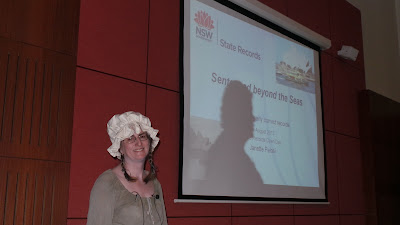 Janette Pelosi, a Senior Archivist at State Records, read us her paper about the "Sentenced beyond the Seas" project at State Records. She explained the scope of the project and demonstrated how one could access it. 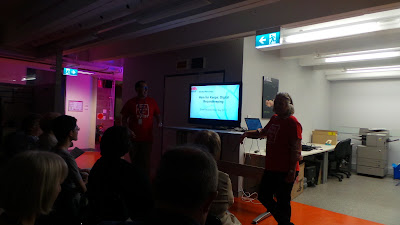 For the next session we were lead into the bowels of the State Records building along a corridor past lots of archival storage material to the Digital Preservation area where Peri Stuart and Paul Elliot co-presented "More for Keeps: Digital Recordkeeping". Although they mostly spoke about government records the principles they discussed were relevant to the management of personal digital collections. I found the content of this talk particularly useful.

I spent my long lunchtime looking at the secondhand book sale; I was strong and resisted. I was also pleased to catch up with Judy, a mate from Hornsby Library and another former librarian Judy who was in my course at The University of Technology when I studied for a library degree many years ago. It's amazing how many library types are into genealogy. So many of my former colleagues have the bug. 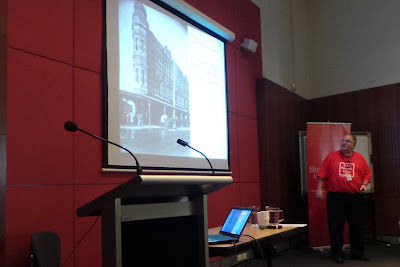 My prize for speaker of the day goes to Senior Archivist, John Cann, for his talk "Cars, Cars, Cars". I went along even though I wasn't convinced that this talk was for me. John was an excellent speaker who engaged his audience with humour, mystery and fabulous information in two great stories about men and their cars, one a Premier of NSW and one a gangster.

John told his story without notes; he used his excellent slide presentation as a scaffold to tell the stories. His talk demonstrated that, with some concentrated research and a lot of effort, the resources found at State Records can be put together to tell an amazing story. If you get an opportunity to hear John speak do take it; I note that John will be presenting at Tuggerah Library on a couple of occasions in 2014. 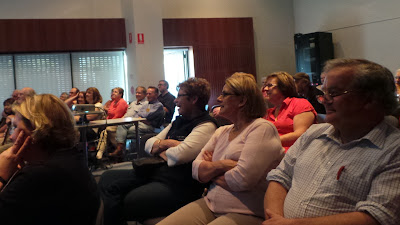 The audience was spellbound by John's presentation. 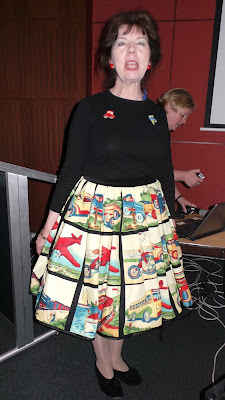 Last speaker of the day, Senior Archivist Gail Davis, dressed for her talk "I've been working on the Railroads" in a smashing skirt made from transport related fabric. As well as discussing the Railway worker's record series held at State Records Gail highlighted some of the other occupational records that are held in the archives.
Posted by GeniAus at 8:40 PM