Trove Tuesday - Our Debt to Ireland

The Leprechauns are on my side tonight. 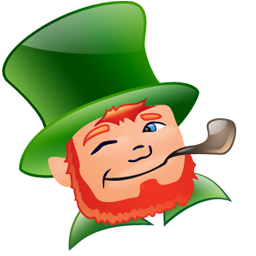 I was just trawling thorugh Trove to see what new stories I could discover on my Irish ancestors when I found an aarticle I just had to share on this St Patrick's Day Trove Tuesday.

My Great-Aunt, Eliza Tierney, had in 1907, as a 12 year old, submitted an article to The Catholic Press in Sydney entitled "Our debt to Ireland". In the article she talks of the trials faced by early Irish priests in Australia. As she lived in Queensland I don't know if I ever met Aunt Lizzie who died when I was an infant.

I was thrilled to discover and read her article on St Patrick's Day. I don't know that 12 year olds today would write in a similar vein. 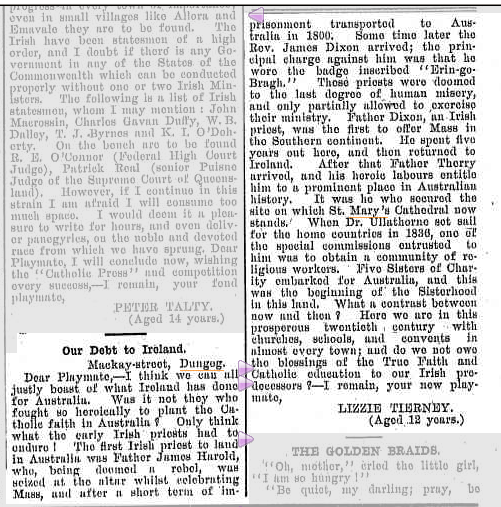 And here is the transcribed text of the article:

Our Debt to Ireland.

Dear Playmate,— I think we can justly boast of what Ireland has done for Australia. Was it not they who fought so heroically to plant the Catholic faith in Australia ? Only think
what the early Irish priests had to.endure ! The first Irish priest to land in Australia was Father James Harold,who, being deemed a rebel, was seized at the altar whilst celebratingMass,and after a short term of imprisonment transported to Australia in 1800. Some time later the Rev. James Dixon arrived; the principal charge against him was that he wore the badge inscribed 'Erin-go-Bragh. ' Those priests were doomed to the last degree of human misery,and only partially allowed to exercise their ministry. Father Dixon, an Irish priest, was the first to offer Mass in the Southern continent. He spent five years out here, and then returned to Ireland. After that Father Therry arrived, and his heroic labours entitle him to a prominent place in Australian history. It was he who secured the ,site on which St. Mary's Cathodral now stands, When Dr. Ullathorne set sail for tho home countries in 1830, one of the special commissions entrusted to him was to obtain a community of religious workers. Five Sisters of Charity embarked for Australia, and this was the beginning of the Sisterhood in this land, What a contrast between now and then? Here we are in this prosperous twentieth century with churches, schools, and convents in almost every town: aud do we not owe the blessings of the True Faith and Catholic education to our, Irish predecessors ?— I remain, your new play mate, LIZZIE TIERNEY.(Aged 12 years.)
Posted by GeniAus at 9:09 PM

What a wonderful find. And very mature writing.

Truly amazing for a 12 year old, even for most adults. A great insight into those times...and a wonderful find for you.

Wow, what an amazing find!!

How fitting for St Patrick's Day. I've just been reading about Father Therry and Dr Ullathorne in Parramatta and Windsor, very interesting!

Trove does it again. Such a great repository. Another great find.