Was this my Great-Great-Grandfather?

Found this on Trove today: 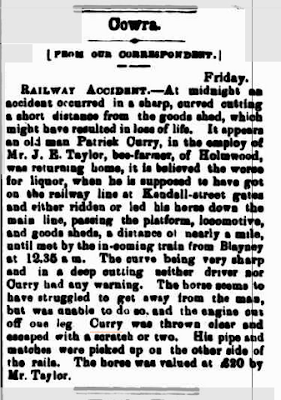 The article from Page 2 of The Bathurst Free Press and Mining Journal on 22 June 1895 could be about my Great-Great-Grandfather, Patrick Curry (1834-1896),  who was resident in Cowra at the time. I wonder how I can verify this?

The corrected text follows:
Cowra.
[FROM OUR CORRESPONDENT. |
Friday.
Railway Accident. — At midnight anaccident occurred in a sharp, curved cuttinga short distance from the goods shed, which  might have resulted in loss of life. . It appearsan old man Patrick Curry, in the employ ofMr. J. E. Taylor, bee-farmer, of Holmwood,was returning home, it is believed the worse
for liquor, when he is supposed to have goton the railway line at Kendall-street gates ,and either ridden or led his horse down themain line, passing the platform, locomotive,and goods sheds, a distance of nearly a mile,until met by the in-coming train from Blayneyat 12.35 a m. The curve being very sharpand in a deep cutting neither driver norCurry had any warning. The horse seems tohave struggled to get away from the man,but was unable to do so and the engine cutoff one leg. Curry was thrown clear andescaped with a scratch or two. His pipe andmatches were picked up on the other side ofthe rails. The horse was valued at £20 byMr. Taylor.

Trove uncovers some amazing unexpected articles. It looks like Patrick had a lucky escape, poor horse though :(

Pauleen, I really need to visit State Records again. Will put this on the task list.