Mr GeniAus and I are preparing for our permanent move to Carey Bay near Toronto, NSW. We have been dividing our time between our Sydney house and there. As one does I started thinking about the people who had lived in Carey Bay. I turned to Trove to learn about some of them.

Firstly I found a photo of Miss Ethyl Thompson but due to copyright restrictions I cannot publish it. You can view it here: http://trove.nla.gov.au/work/15506519.

In the Government Gazette I found a notice of Bankruptcy.

There were several notices relating to probate and estates. 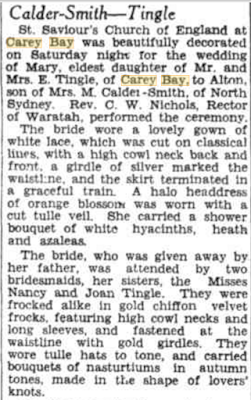 It seems as though the people from our neighbourhood are typical of  Australians all around our country.
Posted by GeniAus at 9:00 AM

All the best with the move north. What a stunning part of Australia you are moving to. Such a great place to live

Thanks Jen. I am enjoying the times we spend here. It's hard to go back to our old place for the big tidy up.