My best friend recently celebrated a significant birthday. I wanted to mark her birthday with a special gift, something that would keep on giving. She and her husband have recently downsized and have gone down the minimalist path so a nice piece of china or a crystal vase wouldn't have been appropriate.

A chance comment she made several months ago gave me an idea but I didn't know how it would be received. I purchased the present when there was a sale and put it aside. Although her birthday was in February I only saw her last week because we have both been travelling.

When we finally got together and I handed over the gift I was quite nervous. She had a perplexed look on her face when I handed over the lightweight parcel. Of course she was polite and read the card first then, when she extracted the white plastic envelope from the gift bag, I encouraged her to open it. She stared at the small pre-addressed brown envelope that was inside before the penny dropped. When she realised what it contained she was surprised and thrilled. 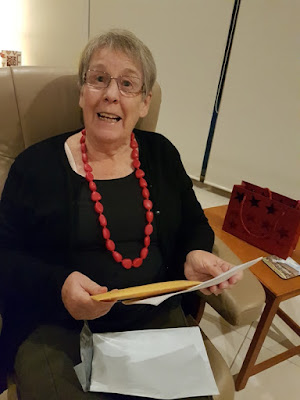 She is a genie and said that doing a DNA test was on her "To do" list. She promised to scrape her cheek and post it off the next day.

My present was a HIT. If you can't think of something for the persn who has everything how about surprising them with a DNA kit.
Posted by GeniAus at 5:25 PM

What a great gift! I love how you have captured her reaction.
Happy Easter Jill!
Betty

A thoughtful and innovative gift.. I love the look on your friend's face..

Whew! What a relief though I think you might have bough her some headache pills which she's bound to need once the confusion of results arrives.