I attended for the first time in my Rootstech History the semi-finals of the Innovator Showdown. It was a most exciting and invigorating event in which ten new and innovative software applications were vying for a place in the finals on Friday 10 February where they will have the opportunity to win part of a $190,000 prize pool. 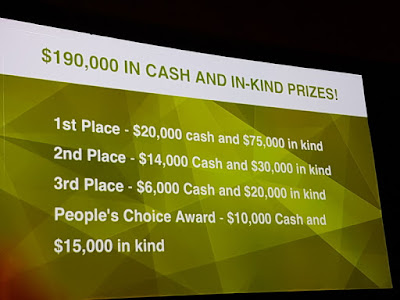 As I had been on the judging panel that selected the 10 semi-finalists from the 40 entries I was most interested in the judging process which included two minute pitches by the developer of each product. After we had seen the presentations the judges retired to deliberate and we had to wait until this evening to discover which programs had made it into the finals. I was disappointed to see from the questions some of the judges put to the developers that some judges had not played with the products prior to the showdown.

I was safor three of my favourites Champollion 2.0, CSI: Crowd Sourced Indexing  and Cuzins that did not win a place in the finals as I feel the first two were unique and innovative and the third was a fun app that would appeal to all ages.

I was delighted to see Double Match Triangulator (DMT) and Qroma Tag gain a place in the finals. I have used DMT and would definitely use Qroma tag if it was available for Android.

I look forward to the Innovator Showdown Finals on Friday.
Posted by GeniAus at 4:51 PM

Champollion is BRILLIANT, how did I not know about this before?