A Day off from Family History?

The Family History Library in Salt Lake City is closed on a Sunday so the Aussies who are in town for Rootstech had to find alternative means of entertainment.

I had received an invitation from Kiwi Genie, Roger Moffat, to join he and his wife Lisa for a trip  out into a local tourist spot. I was joined in the backseat by fellow Aussie blogger, Lilian Magill.

Our destination was the Snowbird Resort. As we headed up and up into the mountains I was concerned that I might have trouble breathing in the clear mountain air. Somehow Roger managed to get a parking spot right at the door of the Snowbird Reception Building so we didn't have to walk too far. We had an unremarkable lunch in the cafeteria before buying tickets for a return trip on the Aerial Tram which was a gondola/cablecar type vehicle. My Senior's return ticket was only $17!

As foot passengers we were given priority boarding over the hordes of skiers who were waiting for a ride to the top. These chaps were packed in after us like a school of sardines. It was a long, spectacular ride that took me higher than any similar rides I have done although it reminded me of the scenery from the smaller gondolas in Banff. 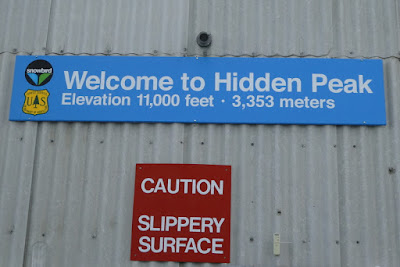 The air at 11,000 feet was rather fresh and the temperature just above freezing but the sun was shining and the breeze light. We only spent about half an hour wandering around, taking photos and talking to some friendly skiers. 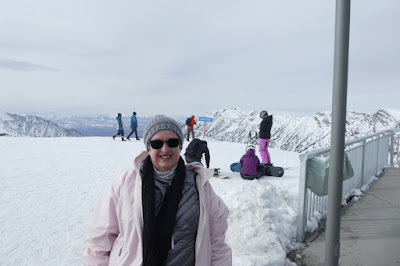 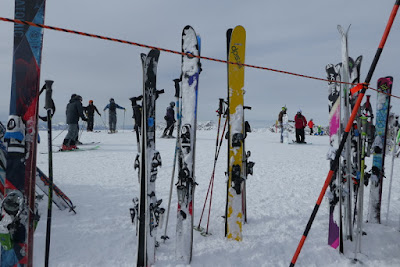 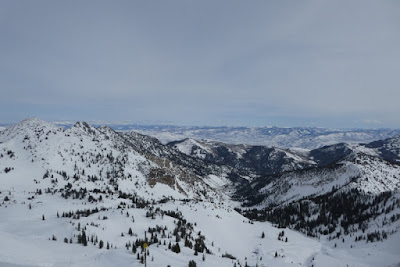 In contrast to our ride up the mountain the car for our descent was nearly empty, most of the passengers were tourists like us who gone up on for a joy ride. On our way down I enjoyed watching the skiers make their way down the very steep slopes on the mountain whereas on the way up I was mesmerised by the views.

On our return to Salt Lake City Lilian and I decided to have a rest and go for dinner at The Cheesecake Factory as we thought it might not be crowded on this night of the Superbowl. I sent out a private Facebook message to all the Aussies I knew who had arrived for Rootstech and rustled up a group for dinner. as downunder people Roger and Lisa also joined us.

We had a beaut impromptu dinner for 10 (including three Aussie Rootstech Ambassadors) , the food was a vast improvement on our lunch and the company was ConGenieal (a new word for the Geneadictionary!). Although some of us knew each other we all made new friends or met online friends in the flesh for the first time.

It wasn't a day off from family history after all. When genies gather family history is always on the menu as it was today.
Posted by GeniAus at 4:31 PM

Sounds like a very ConGenial day! What a great new word.

What a great day and so good to see your photos. I'm enjoying my vicarious travelling thanks to you and others