Today finds me in Hobart on board a a modern cruise ship, The Voyager of the Seas, learning about genealogy with over 240 other family history enthusiasts from the Unlock the Past crew .Wondering what Trove could tell me about cruising on modern ships I entered the search term "modern cruise ship" into the newspapers search there and selected the following items to share. What a coincidence that the ship in these articles was also in Hobart. 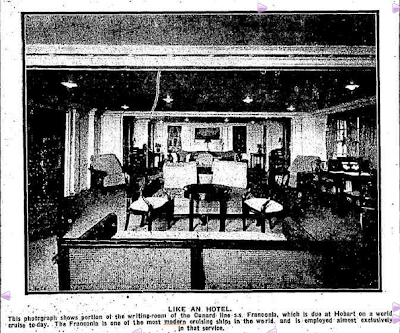 This photograph shows portion of the writing-room of the Cunard- line s.s. Franconia, which is due at Honart on a world cruise today.
The Franconia is one of the most modern cruising ships in the world, and, is employed almost exclusively in that service. 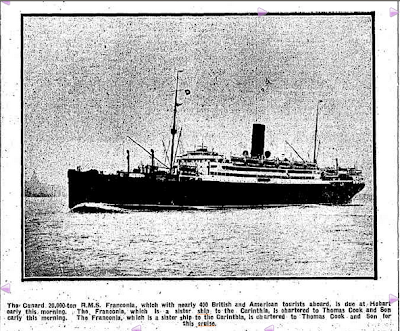 The Cunard . 20,000-ton R.M.S. Franconia, which with nearly 400 British and American tourists aboard, is due at Hobart early this, morning ; The Franconia, which is a sister ship to the Carinthia, is chartered to Thomas Cook and Son for this cruise.
Posted by GeniAus at 8:00 AM