What a bit of excitement yesterday's post Australian Vital Records on Ancestry created for my little blog.

Since I posted yesterday Blogger Stats tells me that the page has had 179 page views (oops that's 190 since I started writing). That's a mighty lot of page views for one page on my little blog in one day.

Gould Genealogy, in its blog, mentoned my post so that probably sent some traffic my way. They also posted a message about the new resource on their Facebook page that brought comments like:

"too many missing people and some glaring errors found already - badly mispelt surnames and the coverage varies state by state which needs to be made a lot clearer. I'd rather stick with the bdm cds i have and online searches on each states bdm site i think.

Not impressed at all."
"I have found they have a few transcription errors, but is should be very useful to search across different states at the same time :-)"

"All the entries I've searched so far have given time ranges rather than a year, eg 1907-1916. It could be useful though for if you suspect someone has moved interstate, and want to get some clues on which of the other states/territories to focus your searching in."


I think the problem with Ancestry's  "exciting new collection" is that, in the description of the indexes on the site, they do not clearly state that the indexes do not give complete coverage for all states for the years stated eg "Births 1788-1922" implies that records for all states for that period are available. An extra little sentence stating clearly that the indexes are not complete rather than  saying "this database features some of the most comprehensive indexes available of historical Australian birth records" would give users a clearer picture of content available and counter possible frustration and disappointment. 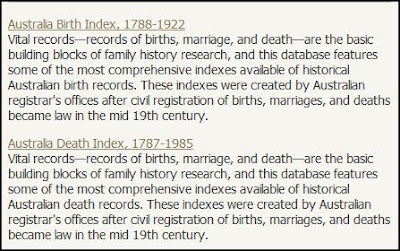 I am thrilled that I can search records for other states but would like to know exactly what years are covered for what areas. The information may be buried somewhere on the Ancestry site but it is not clearly visible. A simple hyperlink, Database Coverage, could lead users to a page that lists the coverage.


Believe it or not, I am an Ancestry fan who each year coughs up the annual access fee. The resources there have been invaluable in helping me find ancestors and distant cousins.
Posted by GeniAus at 10:06 PM