A Fighter joins the Fray

It was when I read this newspaper article from 1942 I learnt that Mr GeniAus' Great-Uncle Herb, John Herbert Gillespie (1893-1964), was a former boxer. Herb Gillespie fought under the name Herb Sullivan. 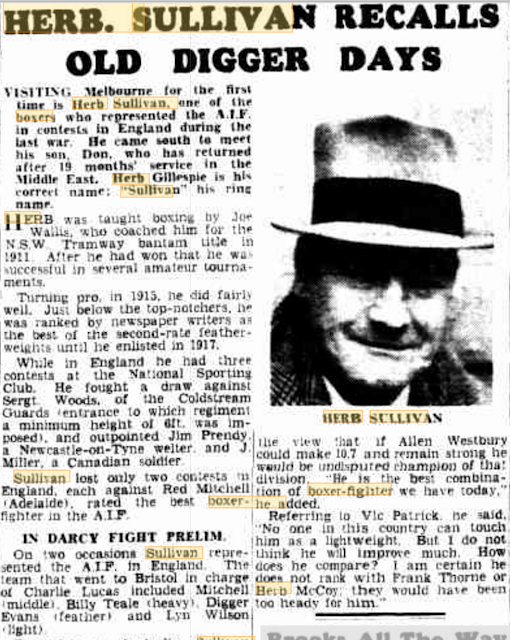 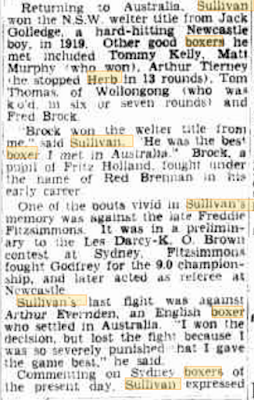 As a family member had sent me a photo of Herb Gillespie in military uniform and gave me permission to use it I selected Herb for my post for the 2016 Trans-Tasman ANZAC Day Blog Challenge.

Prior to enlisting in 1917 Herb worked as an Engineer's Machinist, his next of kin was Violet (nee Baker) whom he had married in Sydney on December 4, 1915. A search on Trove indicates that Herb spent a lot of time in the boxing ring from around 1913 and turned Pro in 1915.

Herb was able to pursue his interest in boxing on the journey to England in January 1918 on Miltiades. He recounted some experiences in a letter home.


Finally in July 1918 Herb was shipped from Southampton to Rouelles, France. As a member of the 13th Battalion Field Artillery and then the 5th Field Artillery Brigade Herb would have seen action on the Western Front until the time of the Armistice.

It is not known how Herb sustained a fractured fibula but this injury in December caused him to be sent to hospital in England and repatriated to Australia. An Australian sporting newspaper details some of Herb's boxing activities during his time in England. Herb was fortunate that most of his battles were fought in the boxing ring against a known opponent.

Another interest of Herb's was growing Gladioli as reported in the the following article, http://nla.gov.au/nla.news-article194495628. the first section is below.


This post has been prepared for the 2016 Trans-Tasman ANZAC Blog Challenge
Posted by GeniAus at 9:50 PM

What a fascinating story. I got a bit confused with the Gillespie/Sullivan thing, but went back and re-read it. It's a bit like a stage name isn't it I guess? Well done on entering a post for this challenge.

Thanks Alex, I've added another sentence about the name so that it is clearer to the reader.