Last night I shared on Google+ a letter of condolence to Jackie Kennedy on the death of John Fitzgerald Kennedy from Patricia Hall of Corrimal Street, Wollongong. The letter had originally been shared by the US National Archives.
My interest was piqued because the typed letter the Archives chose to publish was from an Australian.

As I don't want to breach copyright I won't paste a copy of the letter to this post; it can be seen here: http://blogs.archives.gov/prologue/?p=12997.

I started wondering about Patricia Hall.  A quick trip to Ancestry and a check of the Electoral Roll told me that her full name was Patricia Constance Hall, a Secretary living at 128/130 Corrimal Street, Wollongong in 1963. There were no other people with the name Hall registered at the same address. That Patricia was a secretary answers my question as to why she typed her letter of condolence. 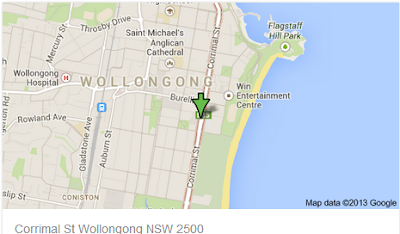 A search of the NSW BDM Indexes told me that a marriage between Patricia Constance Comerford and Parnell Hall was registered in Wollongong in 1941. It is highly likely that this is the Patricia who wrote the letter. A visit to the State Records NSW site tells me that they hold divorce papers for Patricia and Parnell who divorced in 1952. A search on Trove returned several articles referring to the divorce case, one of these from November 1953 named three children of the marriage : Stuart Hall 10, Annette Hall 7 and Louise Hall 4.

I hope that one day Stuart, Annette, Louise or their descendants come across this post and are able to view letter that their mother sent to Jackie Kennedy in 1963.
Posted by GeniAus at 2:17 PM

I stumbled by accident upon your article about my Mother last night regarding her letter of condolence to Jackie Kennedy in 1963. i knew she had sent the letter and also that she had received a thank you note in reply. It brought tears to my eyes while reading it; particularly that distinctive signature. She was indeed a beautiful, gentle person. Mum would have been embarrassed if she had known her letter was published as she was a very private person but it was a thrill for me to read it. I will contact Stuart and Louise to let them know.
Yours sincerely,
Anette

So pleased that my blog post reached a family member.