What a hectic day!

7:00 am I just got into the breakfast room at The Radisson  before a big queue built up. As I had left Mr Geniaus asleep I shared a table with fellow Android enthusiast Linda McCauley whom I had not previously met.
7:30 am Met Paul Nauta from Familysearch for a tour of the exhibition hall before the crowds surged in. Strolled past Thomas MacEntee who was busy organising geneabling for the geneabloggers at Rootstech.

8:15 am Ushered to front seats for the opening ceremony. I enjoyed Jay Verkler's look into the future but feel that this opening lacked some of the pizaaz of the 2011 Opening keynote.

10:00 am Settled down in the media hub to go over my slides for this afternoon's presentation. Didn't get a lot done because I was so busy meeting online genimates; meeting these folk is just like catching up with friends one knows in 'real life'. I was particularly excited to meet Bart Brenner as I like his approach to genealogy.

11:00 am I skipped the second session so I could concentrate on my slides and then prepare for my first video interview with Darrin Lythgoe developer of TNG (The Next Generation of Genealogy Sitebuilding).

12:00 pm I don't think I bungled the interview with Darrin. We'll see when I get the file which I'll probably post on Youtube.

I got conscientious after lunch and attended two sessions before mine. I attended the first session on Using Android Devices for Genealogy and Family History with David Lifferth. I was pleased that he and his co-presenter took a different approach to this topic than that I had planned. 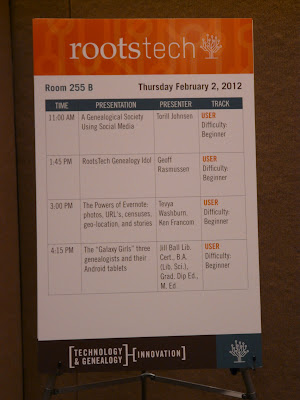 I made a poor choice with my next session The Powers of Evernote: Photos, URL's, Censuses, Geo-location, and Stories I should have taken note of the Beginner status of this session as I didn't learn anything new about Evernote, The presenters Tevya Washburn and Kurt Francom were very enthusiastic and offered further help to those present. As the room was so crowded and I was sandwiched between two portly gentlemen I was unable to take notes, photos or tweet from this session.


4:00 pm was tummy butterflies time for me as my session approached. Thankfully much of the crowd from the previous session filed out of the room so I was able to cool down before taking the stage. I was buoyed by a number of greetings I received from Australian genies via various social media, it also was good to have the support of Jan Gow from New Zealand and Mr Geniaus in the audience, thank you. I think my presentation went well. Even my harshest critic, Mr Geniaus, said it was okay. Others said I was cute and funny while others said they learnt something. Thanks to the audience especially my breakfast mate, Linda McCauley, who contributed valuable insights to the conversation.

Tweets that I came across included:

Apps give the ability for you to share very easily into a lot of programs - blog, email fb, g+, more @geniaus #RootsTech

Oooh, I didn't know librarything has an Android app, I'll have to check that out @geniaus #RootsTech
5 hours ago
»

There is a difference between apps and widgets, just ask @geniaus, but don't argue with her about it! #RootsTech
5 hours ago
»

Tablets have some limitations, you may not want to write you're whole personal history on your tablet :/ @geniaus #RootsTech
5 hours ago
»

Android tablets are multifunction, like women @geniaus #RootsTech
5 hours ago
»


I am most appreciative of the input from my Australian Genimates, Shelley from Canberra and Tanya from the North Coast of New South Wales, The Galaxy Girls, who helped me with content for the presentation.

The evening event was a buffet dinner followed by entertainment two comedians. The warm up act was a young local comedian, I didn't enjoy this so much but maybe my Aussie sense of humour isn't in sync with the US sense of humour. The main act,  Ryan Hamilton , had both Mr Geniaus and I cackling. We really enjoyed his show.

Email ThisBlogThis!Share to TwitterShare to FacebookShare to Pinterest
Labels: Rootstech

Thanks for the excellent report Jill! Wish I was there.

Great to be going along for the ride with you, Jill. thank you for keeping ua all in touch.