Do you know Jack Bales/Boles, Skewy Chefers or Jack Grant?

Taken in 1941 at East Hills according to the notation by my father on the reverse side this is a photo from his Army days. I think it may have actually been after July 1942 when my Dad joined the forces! 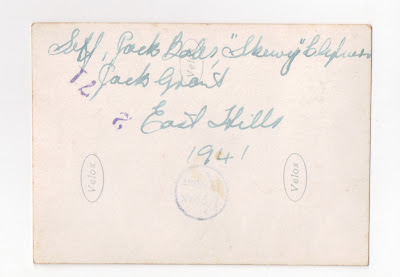 During 1942 Allan John Curry was stationed at Holsworthy Army Barracks near Liverpool in Sydney, NSW. I cannot find mention of a camp at East Hills so presume that the boys in this photo were at East Hills for some sort of swimming carnival or perhaps a bit of R&R. Maybe they were taking a dip in the nearby Georges River.

I'd love to hear from anyone who knows the other boys in the photo. I am happy to send you a higher res of this image whose original is a typical tiny old print.