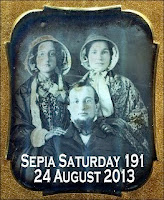 Rob From Amersfoort wonders if the subjects in the prompt image for this week are a man with his two wives. This idea resonated with me and sent me scurrying to my online images to find a picture that told us that Mr Geniaus' ancestor, James Ball, had two wives.

The photo is of very low resolution, I hope that I can find the original or we may have to return to Rochdale to take another picture but next time it won't be in January. 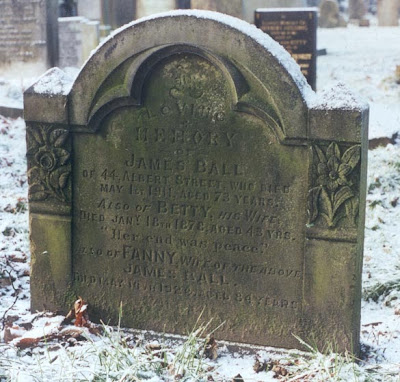 Loved your post..... Fancy them all being buried together !!!! Makes you think!
Jackie
Scrapbangwallop

Curious both wives in the same grave. Of course, in the future with same sex marriages we might see an influx in similar headstones!

What a discovery! Assuming James first wife died, I suppose it is natural for he and his two wives to be united in burial.

Here's the inscription:
I think Betty was the first and died young. Fanny came along later. They're together for eternity though.

I think it's nice that neither wife was left to rest alone. Maybe they were friends before the first wife died.

So, wife #2 outlived the other two; she must have been the one to get everybody together at the end (or join them in the end). At any rate, it's unique!

My Grandad (mom's father) had two wives, (both were sisters). One died after giving him 6 children, then she died. A year later he married his dead wife's sister and she gave him 3 children, (one died in infancy). So, that is the tale of the two sisters who married the same man!!

The way you started I thought maybe he had two wives at the one time! Pays to read the whole story doesn't it!

It wasn't until I read the stone that I realized that he probably didn't have two wives at the same time.

How very cosy. Let's hope they al got on togethert. That's a very interetsing headstone.

So his second wife died last - she must have known that he was buried with his first wife. But who decided that Fanny should join the.

A fine post. I enjoyed following the thread and reading the comments. Thanks!

Were they sequential or concurrent...could be a good gossipy story.

Boy, o boyo, this gravestone got me thinking. An old friend died a while back, buried with is first wife --- but 2nd wife was very intent on being top wife. I heard that she died recently, so someday I may have to go and see just what story plays out of that gravestone. Thanks for an interesting twist.

Do you think Fanny got a frosty reception when she arrived late, as the spare wheel?

Wow, clearly he was a man that truly loved both of his wives very much! What a great find.

Well this post has made me think. My tree has a woman with six children who then marries her late husband's brother and has another six children. I hadn't thought to investigate the burial arrangements ! Thanks.

Well this post has made me think. My tree has a woman with six children who then marries her late husband's brother and has another six children. I hadn't thought to investigate the burial arrangements ! Thanks.

Thanks, all for your comments. Wife 2 must have been happy to go in with the others. My other issue is trying to work out how the second James Ball fits in to the family.