Family History Through the Alphabet – N is for …Browser 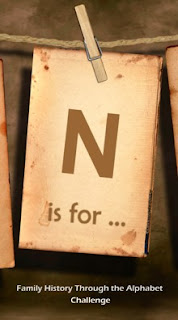 Netscape Navigator was the first browser I used consistently to surf the web in the mid nineties after using Mosaic for my early explorations in cyberspace. If I remember correctly Netscape came installed on my computer and, if one didn't get it this way one had to purchase it.

When Microsoft introduced the free Internet Explorer 3.0 in 1996 I tried that out too. I also dabbled with Yahoo's search. As Yahoo was a directory rather than a search engine I did not use it too often preferring Internet Explorer. Then, after it was released, I was true to the Australian search engine ANZWERS for local searches until Mozilla Firefox came along in 2004. I had a long relationship with Firefox until around 18 months ago when I was seduced by Google's Chrome.

On my Android devices I have tried a few browsers and over a year ago switched from Opera to the Dolphin browser.

There are a couple of genealogy search engines around. As I don't have a very high opinion of the most popular one I am not even going to mention its name. I believe that carefully constructed searches on a general search engine will return better results than that product.

I believe that a book without an index is useless similarly if we didn't have an efficient browser to provide a gateway to the World Wide Web we would not be able to easily access all the wonderful genealogy resources in cyberspace.

Which browser do you favour?
Posted by GeniAus at 3:23 PM

That last paragraph says it all Jill! Thankyou for another wonderful post ;)

I use Chrome and love it most of the time. Tried IE and Mozilla but Chrome keeps winning me over. Also love the ease of linking everything with Google such as mail, maps, search, Google drive cloud storage, calender, Blogger, Picassa, reader, Google+ etc

N is for Browser? It took me a moment to remember Netscape. I use Chrome as part of my "lots of Google apps", but I also have Mozilla and use it frequently as well. And like you, I don't find 'specialty' browsers useful in searching - maybe for beginners. Great post, Jill.