I paid attention to one of those shaky green leaves that appeared on my Ancestry account this morning, this directed me to Trove.  I did a search for " Gowans September 1899" and immediately  found what I was seeking.

The back story is that we knew that William Purves Gowans, Mr GeniAus' Great-Grandfather, had taken part in a rescue in December 1898 and had previously read a newspaper report of that event. The new to me article I found described the event at the Sydney Town Hall at which Gowans received his medal. This excerpt from the article sets the scene:

The Town Hall was tastefully decorated with festoons of flags, and the handsome trophy of the
society occupied a prominent position in front of the great organ. From 7 to 7.30 the boys of the Sobraon Band (under Bandmaster F. J. Bourke) most creditably played from the eastern gallery several good selections, which were followed by a pro-gramme of music, well arranged by the secretary, Captain Webber".Fix this text

Further on the article describes Gowans' act of heroism:

"William Purves Gowans. -On December 3, 1898, Mr.
Gowans, who was on the North Coast Company's wharf,
Sussex-street, rescued a youth named Rose, who had
fallen into the water, Awarded Silver Medal and Cer
Fix this texttificate of Merit."

It was pleasing to see that William was presented his award in such superior surroundings but the icing on the cake for us that, included with the article, was a photo of the awardees on the evening. 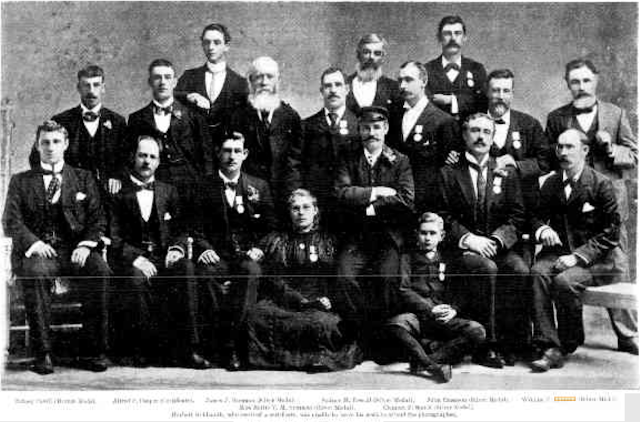 That's William looking serious on the right end of the front row.

Being a good old VolunTrove I have tagged the article and image with William's name so that other descendants searching Trove will easily locate it.

For the curious: http://www.braveryaward.org/about.php gives a history of The National Shipwreck Relief Society of New South Wales
Posted by GeniAus at 8:00 AM