From the Archives - A Dog's Christmas

Ralph and Buddy are no longer with us but we have three new granddogs:   Freddo, Millie and Myelo.

Taking a rest from Christmas preparations I am thinking of friends. Dogs, man's best friends, have been an important part of our family history.We have had a few pooches over the years - they have been 'orphan' dogs - either surrendered to the local council or purchased from the pound. Robbie was a deceased next door neighbour's dog given to me by one of my students. Each of these hounds has had a unique personality and ha 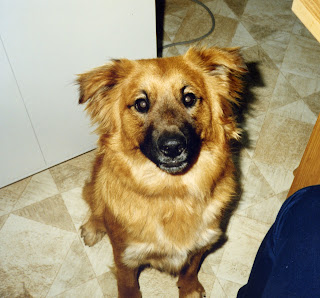 s enhanced our family life.Our first dog Thomas didn't stay with the family long, he was a little too energetic for our tiny courtyard and so went to live with some very good friends who had a much larger yard. Willy, a Border Collie cross, was a gentle and obedient larrikin who was scared of storms. The only time he ventured onto the carpeted areas of our home was when a storm was brewing and he was seeking refuge under a chair or table. When we moved to an acreage Willy became adventurous and was able to find his way out of our property. He was the victim of a car travelling along the road outside our house.Robbie, an Australian Silky Terrier, was my dog. He followed me everywhere and snarled at anyone who came too close to me. The kids had enormous fun dressing Robbie in doll's clothes and parading him around. Mr Geniaus did not appreciate Robbie's over-protectiveness.Marty, another fluffy d 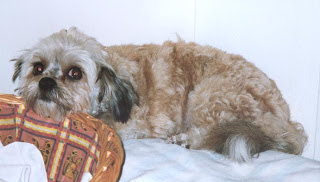 og, a cross Maltese Terrier/Shitzu wasn't blessed with a similar intelligence to the other dogs but he was another loyal companion who follwed me around the house. When we rescued him from the pound he would cower in the corner under a chair and was very timid. After a few months he realised that ours was a safe environment and he realised that he was in charge. Sadly Marty met a cruel end at the paws and jaws of a neighbour's German Shepherd. Until we can guarantee its safety by electrifying our fences or securely fencing off an area close to our house I will not have another dog. I do miss the company of a little four-legged friend.We have three grand-dogs who regularly visit. Ralph, a Border Collie cross, is now an old man who likes to spend his day resting. Like Willy he is gentle and intelligent. Little Neuro is a bundle of energy who, although he is over five, still races round with the energy of a new pup. Buddy, a handsome red and white Border Collie, arrived last Christmas. He has boundless energy and enjoys digging up the garden. 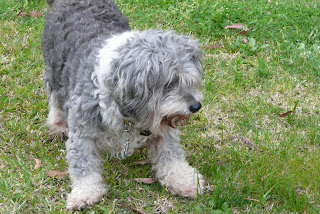 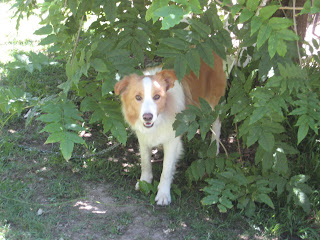 A Dog's Christmas Poem by Shel Silverstein
Tonight's my first night as a watchdog,And here it is Christmas Eve.The children are sleepin' all cozy upstairs,While I'm guardin' the stockin's and tree.What's THAT now . . . footsteps on the rooftop?Could it be a cat or a mouse?Who's THIS down the chimney?A thief with a beard - And a big sack for robbin' the house?I'm barkin'. . . I'm growlin' . . . I'm bitin' his butt.He howls and jumps back in his sleigh.I scared his strange horses, they leap in the air.I've frightened the whole bunch away.Now the house is all peaceful and quiet again,The stockin's are safe as can be.Won't the kiddies be glad when they wake up tomorrow . . .And see how I've guarded the tree.
Posted by GeniAus at 8:00 AM