On Saturday I shared the story of Michael Harrington Ryan, my GGGUncle who was a pioneer priest in Australia, at The Society of Australian Genealogists event : In search of ... My Irish Ancestor.

Although I have been researching my Ryan line since the 1980s it was not until 2012 that serendipity found Michael for me, I was immediately captivated by his story. In my presentation I talked about my discovery of Michael and the chase to find and verify his life story. I shared a few highlights of Michael's life, read excerpts from some of his letters and showed how and where I saved all of the information I have gathered on Michael.

When I volunteered to do this talk I said that I would do a 30 minute presentation, in retrospect I should have been brave and put my hand up for 60 minutes and given a more sedate and complete presentation. Having sat through so many boring presentations about other people's ancestors over the years I was concerned about spoiling the day with a lengthy, tedious talk.

While I tried to mention the many resources I have used in tracking Michael and his family and learning about his life and times I neglected to share a proper list for attendees. The following list details some of the places visited and resources used in my hunt for Michael.  Although incomplete it may be of use to other researchers. It clearly demonstrates that you can't do it all online.

As for the future I will continue to chase Michael and try to get access to the Catholic Diocesan Archives in Sydney, Hobart, Maitland/Newcastle and Westminster (England) which I suspect have many letters to and from Michael and accurate details of his postings. As these repositories aren't too fond of family historians I will need to spin a good yarn to see their files. 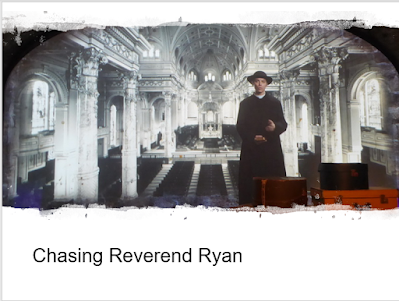 I would have loved to hear your talk Jill. Was planning on attending until I realised the date didnt work for me. This is a great list of sources. I’m can see it’s been quite a chase.