A notice about International Firefighters' Day which is held annually on May 4th (St Florian’s Day) just came up on my Twitter feed so I dropped what I was doing and launched into this post.

On this day we remember two Jims, James Ball (1890-1931) and James William Ball (1918-1990), grandfather and father of Mr GeniAus, who both served in the NSW Fire Brigade which is now known as Fire & Rescue NSW. Theirs were not distinguished careers but these two men, who worked in appalling conditions without the benefit of current safety standards, were dedicated and hard-working officers.

After joining the Brigade James was active in Fire Brigade affairs being a member of the Fire Brigade Band and a coach of the Soccer team.

Mr GeniAus never got to meet his grandfather James Ball who died at the age of 42. We are hoping that one day we can find someone who has a clear photo of James to share with us.

We do not know if James William Ball (1918-1990) joined the Fire Brigade in 1941  to follow in his father's footsteps but presume this was the case. James worked in the Fire Brigade for many years retiring in 1978. During that time he worked at many city stations and East Maitland in the Hunter region.

We family members thought Jim was a special bloke but we are biased, the following words from his boss describe the kind, gentle man that we loved. 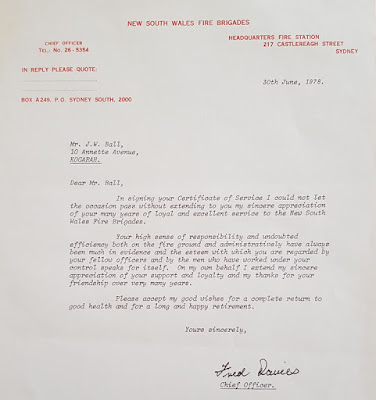 Today we salute the service of two Jims and all firefighters around the world who work tirelessly to protect we and our property.