Was it only four days ago that I retraced Friday's steps to Parramatta for the second day of the expo?

My Saturday started on a high note with  "Immigration from Ireland" by Dr. Perry McIntyre. After my initial shock in finding that Perry, whom I had read about for many years, was a girl not a boy I settled in for a most informative talk. Who said academics were boring? Kerry was the anthtihesis of boring as she spoke with passion and a depth of knowledge on this subject.  Kerry skillfully placed her talk, that was illustrated with images and statistics, in an historical perspective giving us an understanding of why our ancestors left the Emerald Isle. Kerry confirmed that finding traces of Irish ancestors can be a challenge but that with persistence one can sometimes be successful.

In my second talk I went on a virtual tour of the treasure of the Mitchell Library with Paul Brunton. In his talk " The Mitchell Library and its collections" Paul,  after giving a short history of the library, focussed on some of the treasures of the library that are not what they seem. He talked about collection items that included, maps, letters, manuscripts, china and artworks. Paul indicated that looking at these old items in current often gave historians clues about social life and conditions of the times in which they were produced. Paul,a polished presenter who gave a talk laced with humour, demonstrated a passion for the Mitchell and its collections.
I felt like I had won the trifecta after attending my third talk "The SAG Treasure Chest: how the Society's collections can help you" with Heather Garnsey, SAG Executive Officer. I had heard three competent, passionate and knowledgeable speakers in one morning.


In her informative session Heather gave the audience a history of the Society and then outlined the items in the collection and how they can assist with one's research. She indicated the economic benefits of membership for those join up and use SAG's facilities. I am a longtime member of the Society who does not use these facilities nearly enough, Heather gave me a wakeup call.
During the next two sessions I spent time volunteering on the TMG Sydney User's Group table. It was an honour to sit with these enthusiastic people who give of their time and energy so freely to promote the package about which they are so passionate. One thing users need to consider when purchasing software is the amount of support available. Apart from online support from the vendor members of the users group offer their expertise generously through a listserv and regular meetings at SAG.

There is no rest for the wicked so at 2:00 pm I found myself at the back of a crowded room for Chris Paton's talk "Discover Scottish Church records". Chris did his best to liven up this rather dry and confusing topic. My enjoyment suffered as I was unable to see Chris' slides on the screen and  seeing these visual prompts was vital  in following Chris. Additionally, as I could not see I was unable to record any of the URLs to which Chris referred. I hope I can find them in his book.

During the break I purchased a coffee and came across Neil Chippendale, Local Studies Librarian from Hornsby Library, who was scheduled to give a talk. I lamented that speakers had not been giving handouts; Neil promptly produced from his bag those he had prepared. Good on you, Neil, I didn't go to your talk but know that your participants would have been happy to get those notes of yours. 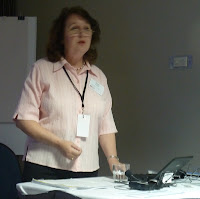 The last talk I attended certainly was the jewel in the crown of a fantastic day. Kerry Farmer presented a talk on "DNA and genealogy". I am scientifically illerate but came away from Kerry's talk feeling as though I had a basic grasp of the concepts she had outlined. Kerry was a calm and competentent speaker who was exceptionally well prepared. At the beginning of the talk she shared a wonderful handout, her many slides were attractive and informative and she made those of us in the audience who didn't have a clue about the subject comfortable enough to ask our silly questions. 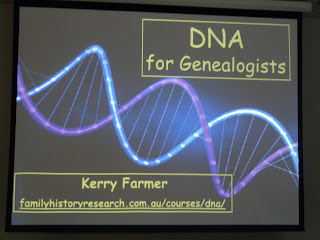 Thanks again to the people from Unlock the Past and Gould Genealogy (it's hard to work out which is which or if they are one and the same) for putting together this event.

Geniaus, thanks for taking the time to report on our event. It is always good to hear how people find it, and we really do appreciate all feedback.

As for Unlock the Past and Gould Genealogy, we're pretty much one and the same, just different divisions. :-)

Thanks for the reviews. I am looking forward to the Expo when it comes to Melbourne.