It's a little hard for an Aussie to write about Justice and Independence with a US slant so I will talk about an Australian who served Australia in two world wars and contributed to the just society we enjoy today.

Frank returned to Cobar in 1919 where he met WWI widow Ethel Chatfield (Nee Pusell). They were married in 1922 and produced five daughters. Frank and Ethel initially lived on their station "Elsinore" outside Cobar but, when it came time for the girls to go to school they moved into town.

Frank and Ethel had 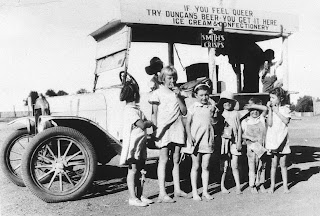 a shop in Cobar and Frank also had an ice cream/catering van that he took to local events where his catchcry was ""Try our home made pies - warm your belly for threepence". The girl behind the wheel in Frank's van, his daughter Lillian, is now 80 years old.

Once the girls grew up and were seeking employment the family moved to Sydney where they settled in Kensington. Frank worked for the local Post Office.

One wonders if the conditions Frank faced when defending his country and The British Empire contributed to his early demise. Frank was an ordinary bloke, a bit of a larrikin, the "Dadda" who gave his girls a happy upbringing and a secure home environment. He contributed to the charmed life I lead in "The Lucky Country."

I am sorry that I never got to meet my grandfather. 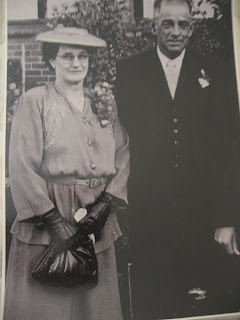 This post has been submitted for the Carnival of Genealogy, 75th Edition - Justice and Independence
Posted by GeniAus at 12:06 PM