I knew about the Dead Man's Penny  which was issued after the First World War to the next-of-kin of all British Empire service personnel who were killed as a result of the war.

I had never sighted one until we visited a museum in a country town today.

This image shows two of these medallions in the Museum collection one of which had been encased in a wooden frame. I was surprised to see how large they are. 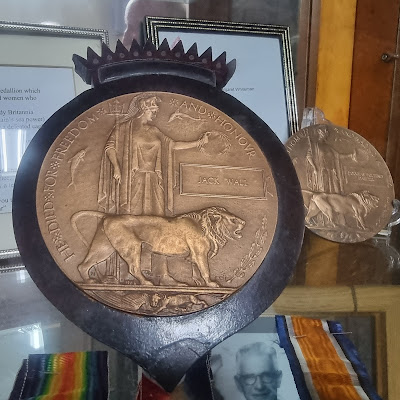 Lest We Forget
Posted by GeniAus at 1:27 PM

I have never seen one. I know there must be a few for various members of our family but don’t know who has them, it seems peculiar they have all disappeared.

Astonishing blog! Informative thoughts and ideas and Visualize relationships and family history intuitively about the ancestors life style Looking for to create family tree, sign up for free, Visit MeMyFolks