19 December 2020 Update: I will continue to add to this list as I read more books and remember more previously read.

The topic for ANZAncestryTime this week is Migration across the seas. 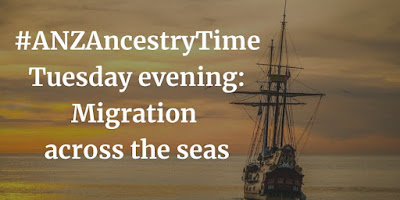 This theme prompted me to reflect on some of the books I had read about immigrants or refugees who travelled to make a new life in Australia, some came by sea and some by air.  I went scurrying back to my reading log on Librarything to jog my memory for those titles.

Following is a list of some of the books I enjoyed.

The Boat by Nam Le  (Suggested by Carmel Galvin)

Chinese whispers : in search of ivy : a gold rush story told by generations of an Australian-Chinese family, Alison Choy Flannigan

Cop This Lot, Nino Culotta
Daddy Cool: Finding My Father, the Singer Who Swapped Hollywood Fame for Home in Australia, Darleen Bungey
Esther : the extraordinary true story of the First Fleet girl who became first lady of the colony by Jessica North

The Floating Brothel: The Extraordinary True Story of an Eighteenth-Century Ship and Its Cargo of Female Convicts, Sian Rees

From Distress to Deliverance : the life and times of william gow, convict, schoolmaster and farmer, Stephen Gow

The Happiest Refugee, Anh Do

I Kept on Dancing: A Life's Journey from Nazi Germany to the Lucky Country, Olga Geddes

Into the Suburbs : A Migrant's Story, Christopher Raja

Otherland: A Journey with My Daughter by Maria Tumarkin

Great list, with some titles to pursue. I can only add a couple more Romulus my father by Raymond Gaita, With just one suitcase by Cheryl Koenig and The Boat by Nma Le.
From a fiction point of view I have just enjoyed A Room made of leaves by Kate Grenville and the memory of Shaun Tan’s picture book Arrival always stays with me.

Lots of titles to check out here Jill. I'd add Hell Ship by Michael Veitch. Looking forward to the discussion tomorrow night.

Thanks for those additions Carmel and Jennifer - I will add them to my reading list.