Tierneys on Parade - My Irish Heritage 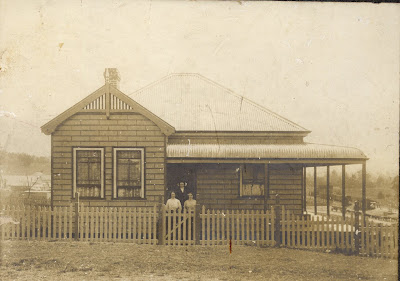 Denis and Eliza soon moved to the Williams River area and were founding settlers in the town of Dungog. Denis worked there as a carpenter and undertaker. Dennis probably put his talents to work on the construction of the family home that is still standing in Mackey Street today.

When Eliza, aged 42, died in 1858 the Maitland Mercury reported - ' Death. At Dungog, on the 26th inst., after an illness of four weeks, Mrs. D. Tierney, leaving a husband and four children to lament their loss.'

Denis, who lived till he was 83 lead a busy life. He was was active in the rifle club and was, for many years, starter for the race club.

Only two of the four Tierney children had a long life. Daughters Jane and Eliza both died of tuberculosis whilst in their twenties. My great-grandfather, John D'arcy Tierney and his sister, Mary both married and had families.

Although I have travelled to Denis' birthplace,Roscrea, Tipperary, and Eliza's birthplace, Templemore, Tipperary, I have not yet found any Irish cousins. Hopefully one day I will be able to locate someone who shares my Tierney heritage.

This precis of my Tierney family's history has been prepared for the 3rd Annual St. Patrick's Day parade, the 18th edition of the Carnival of Irish Heritage & Culture,