Our annual national day, Australia Day, is a public holiday that encourages us to reflect on what it is to be an Australian and about life in our beautiful land downunder and to rejoice in living in The Lucky Country.


The First Fleet of 11 ships that carried about 1500 people, half of whom were convicts, arrived in Sydney Harbour on 26 January 1788, and it is on this day every year that Australia Day is celebrated.

I wonder what our ancestors thought as they left their homes in England, Ireland and Scotland to sail to this distant and strange land. A dozen of my ancestors were convicts transported to Australia for petty crimes, some were young Irish lads and lasses, bounty (assisted) immigrants, who left home during the time of The Great Irish Potato Famine of the 1840’s. A couple were free settlers, people who traveled to Australia of their own free will in the hope of a better life.

Yesterday I spoke to a distant cousin, a 75 year old Scottish lady, who emigrated with her family in 1953. When they left Scotland food rationing was still in place; on arrival in Australia they could not believe the quality and quantity of food they were served at their first family lunch, she thought she was in heaven. She said that her parents never regretted leaving Scotland as they wanted a "better life" for their children and she felt that this goal had been achieved.

My 3rd great grandfather, Patrick Curry from Limerick in Ireland , arrived as a convict on the Hooghley in 1825. On 8th June 1848 The Sydney Morning Herald published an interview by Caroline Chisholm with Patrick on the advantages of emigration. Patrick felt that he was most fortunate to be in New South Wales. 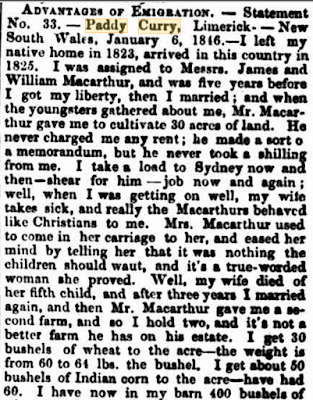 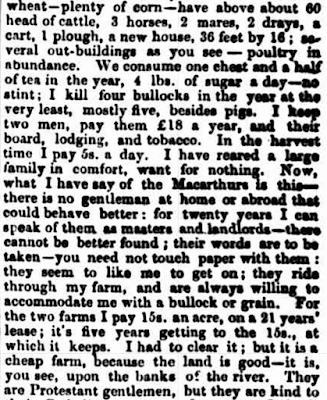