Way back in 1979 my parents moved from a home unit (flat, apartment) in Randwick into a small cottage further along the street where they lived. There were several reasons for this move but one of them revolved around my family.

At the time I had three young children and a fourth on the way. It was difficult climbing up three flights to visit Mum and Dad and there was no outdoor area for the children to play. With impending retirement Mum and Dad also realised that a garden would give them space to get away from each other, a place for Dad to amuse himself plus it would be more convenient for grandchildren visits.We spent several months looking for suitable properties, none of which were quite right.

When Mum was chatting with a lady she knew in a local organisation, this woman indicated that she was selling her home at 28 Dolphin Street. Mum and Dad took a look, they agreed on a price and Mum and Dad moved down the hill on 15 June 1979. Mum moved on to a retirement village several years ago after Dad passed away and finally on the weekend, on her behalf, I auctioned Number 28 Dolphin Street. 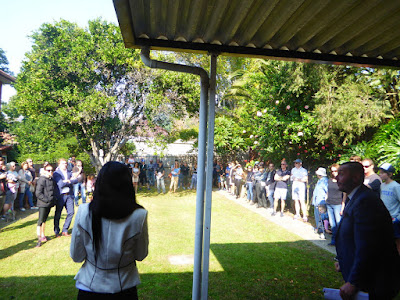 I thought I did not have a great emotional attachment to the house but, as the auction approached, my children recalled the many happy times they had spent with their grandparents at number 28. I realised that the cottage was important to my family history. When they were university students and young marrieds each of my children had a period living in a neighbouring property so they also were neighbours of Grandma and Grandpa for a time and they all kept an eye on each other. With the sale of Mum's house the Dolphin Street era has come to a close.

I am recording this event on my blog and taking a trip down memory lane via some photos in my collection so that future generations will have a window into the times we shared at that little cottage. 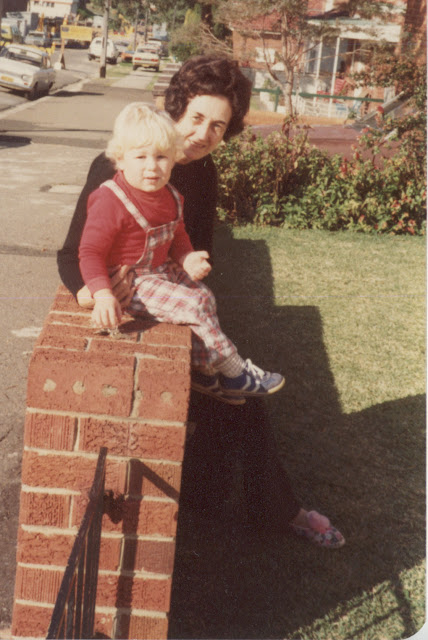 Dad loved taking photos. This is the earliest we have of Dolphin Street and shows Mum and my younger son sitting on the front fence We have quite a few photos of family members sitting on that fence which is seen in the auction Day shot.

Fast forward to 1985 and there's another family group on the fence, my four children, my cousin and her firstborn.

My parents' dining table features in many photos as Mum and Dad loved hosting us and the extended family for various celebrations. Above is a photo from my birthday in 1980. Dad was a big kid who also enjoyed his birthdays (below).


We usually had Christmas lunch at our home but on a couple of occasions we went to Mum's.  Our celebrations were often accompanied by that classic wine, Sparkling Bodega. 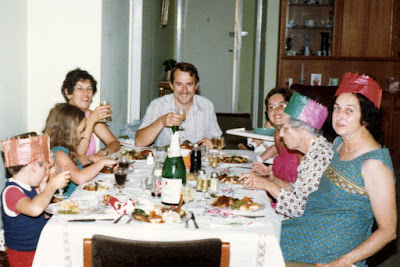 One of Grandma's' specialties was crumbed cutlets which the kids devoured.

While Mum loved cooking she was happy to sit back after she had served a meal. Dad would don an apron and wash the dishes, he used make such a splash that the floor got a wash at the same time. Sometimes one of my children would help him. 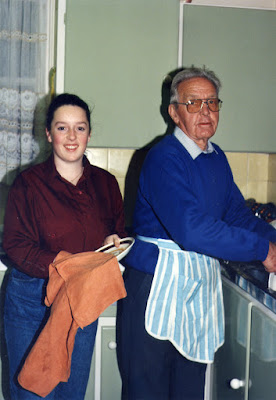 When they were home alone Mum and Dad had their meals and coffee breaks  at their small kitchen table. 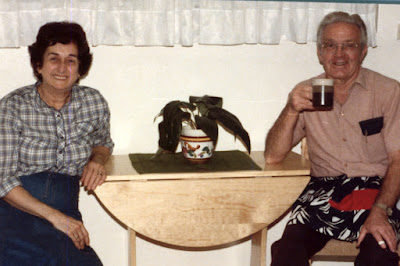 Dad nurtured the old Magnolia tree in the garden. As they grew my children spent a lot of time in that tree. 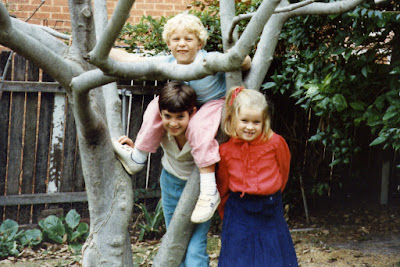 The kids had the run of the house. Grandma always had activity and painting books to amuse them. 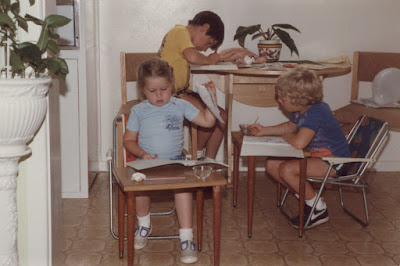 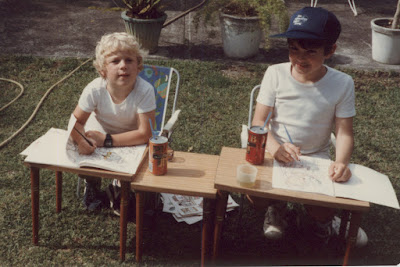 One error of judgment on my part occurred when I gave my parents a pound puppy, Susie. I thought they needed canine company but they didn't. Thankfully Susie found a happy long term home with my cousin.

My maternal grandmother was always included in celebrations. 1988 was the last time we celebrated Mother's Day with her, in the photo below are four generations of females in my family. 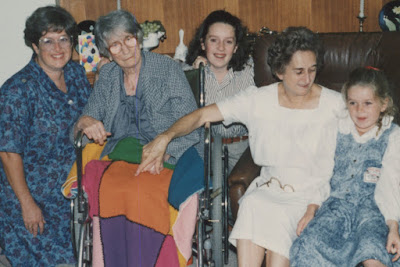 Dad's last visit home from his nursing home to Dolphin Street was in 2000. 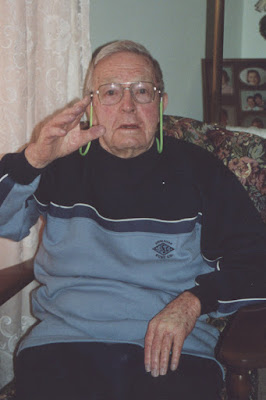 And in 2001 a new generation came to Dolphin Street when Mum's first Great-grandchild visited. 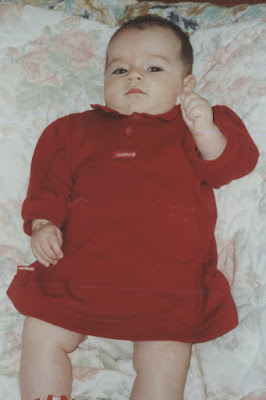 Until she moved to a retirement apartment Mum was quite houseproud.

Although Mum was quite keen on decorating she saw no reason to replace the bathroom which the real estate agent described described as "classic and spacious". When my grand-daughter visited on auction day she was quite taken with the pinkness of it.

One of my favourite of your blog posts. Ownership moves on but those happy memories last forever <3

One of my favourite of your blog posts. Ownership moves on but those happy memories last forever <3

Although time cannot stay still, it is nice that you can record it on your blog for future generations. When my Grandma died in 1988, I went around and took photos of every room in her house, as furnished, so I know how nice it is to have these images of times gone-by.

Michelle, I've spent a few hours today making sure all the photos of the house are appropriately tagged.

Houses create so many memories. And often it's only at the end you realise just what it meant to you. My Lonetester's grandma has a whole wall as a pinboard, with photographs, newspaper cuttings, kids drawings etc. It was a wall of memories and moments. And every family member remembers well ... but no-one even thought to photograph it before taking it all down when selling the house after she passed away. At least your photos and memories of this house are recorded and shared for future generations.

Wonderful Jill! Great memories, which are now recorded for future generations :) I loved reading it! The bathroom reminded me of my grandparents home!

Fond memories indeed for you and the generations to come.

WOW...I now realise I should make sure I have lots of photos, for when my family home goes under the bulldozer...thanks for sharing those wonderful memories Jill.

You reminded me to organise the photos I have of our home, and take some more... I wish there were photos of my childhood home, but I can only find one, outside.
Great to have visual memories as well as those in the heart.

My sister is hoping to sell the house where she grew up this year. We moved in just before she was a year old. I must remember to aske her to take some photographs of the inside. I have a few but they are mostly the outside. I don't think I have any photographs of the other places where I lived as a child.

Great post! We recently sold the house my parents owned for 55 years and all of us were raised in. For whatever reason, after my mom died but before we touched anything I went through the house and took photos of every room. Boy am I glad I did! I thought OUR pink bathroom was pink but it doesn't hold a candle to yours :-)

Saturday must have been a bitter-sweet day for your family. Thank you for sharing some of the wonderful memories you have of the house but especially all the family times there. It will be a great gift to the future.

Jill, I enjoyed your memories very much. Great idea to do a blog post so that the memories from Dolphin Street are shared. Wonder if the new owners will ever see them? Fran

Fran, I must just send the link for this post to my real estate agent.

Loved this post Jill. So many wonderful photos and memories . . . brought a tear to my eye as I remembered similar events in times gone by, in my own family. What wonderful parents you had!

Another Hicks family connection with a Geniaus Blog post ..