I had previously talked about my intention of going through all the BDMs (vital records) in my possession and going over them with a fine tooth comb. It's proving to be an illuminating exercise.

I had pulled all of the copies I have out of their plastic sleeves with the intention of scanning them and then placing the copies (which have cost me several $$$) into acid-free sleeves and folders. Last week as I was researching the Irish ancestors I thought I'd see what I could dig up on them but then I decided to have a rest from the Irish and go through all my certs. 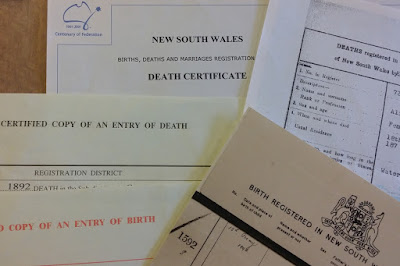 What have I discovered?

* Certificates that I didn't even know I had and from which I had entered no information into my database. I am carefully examining them and adding info to my Family Historian database. I am also noting in the notes field for the source if I actually hold a copy of the record in question.

* I realised that one of the certificates I had wasn't for the right person so had to lop another branch off my tree. Since I purchased that certificate I had found other evidence that refuted what was in the certificate. It pays to revisit.

* I found several factual errors on certificates. Further evidence gathered since I procured the certificates shows them to be wrong. It pays to use multiple sources.

* I am finding familiar names as witnesses to BDM events now that I revisit the certificates. The knowledge of families I have gathered over the years has made it easy for me to recognise these names. Knowledge gained over years of research helps one make valuable connections.

* I've been doing some fact checking on other sites as I go along and it's interesting to see how many folk have copied my stuff (including typos) into their online trees.

* By using the clues contained in online trees as I go through my certificates I have made some valuable discoveries. I managed to finally kill off Mr GeniAus' 2x great-grandmother the other night because someone had provided a source in their online tree.

* I have found something new on just about each certificate I have put under the virtual microscope.

* As a result of this activity many of the previously unsourced events in my database now have sources.

We are often reminded of the value of doing such an exercise. I can thoroughly recommend putting your research on hold  while you go nitpicking through the  records you have to hand.
Posted by GeniAus at 1:28 PM

I am going to be doing this soon and I am glad now that I see you have made new discoveries. I recently went through and made a list of all the records I had in acid-free sheet protectors. I was trying to list if I had it scanned yet or not and so many times I couldn't even remember. Then I found I hadn't even entered my grandparents and great-grandparents birth certificate information into my database yet. I thought I had done that a long time ago!

Have a great day,
Kathleen

Hi Jill, great post. I agree going back over certificates is most worthwhile. If I only have 10 minutes I just revisit one and re check my tree. I also keep a spread sheet listing names in my tree and tick off them when I find or purchase BDM info and certs. Fran

Great timing Jill - I am currently working on just this mini-project, as I had only just realised that I was missing some certificates for ancestral events. So I am going to become a nit-picker too!

Thanks for stopping by everyone. The nitpicking is done so now I'm scanning all those documents which I don't have in soft copy.

Great work Jill and great reminders for us all.