The relationship to me is complicated but Lynn Izard who wrote the following letter is the daughter of George who was was previously married to my Great-grandmother, Catherine Molloy.

Having just discovered that George and Catherine had a daughter, Mary Isabella Ellen Mary Izard, in  Mitttagong in 1901 I took to Trove with a simple search "Izard Mittagong" to see what I could find on the family. I haven't looked at the Izzard/Izard branch since 2011 so was pleased to be rewarded with many hits which I need to follow up.

I particularly enjoyed reading this letter to a Children's page from Lynn as it describes the area in which my Great-grandmother would have lived with George prior to her death on 1904. 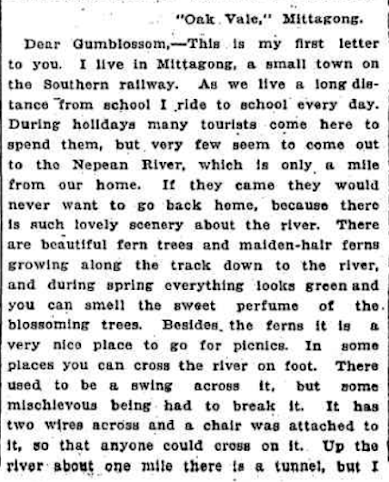 What an amazing insight into your ancestor's life. I love finding something in my ancestor's own words.